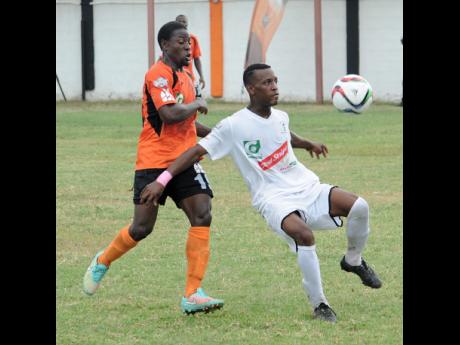 Still, they came away with a 1-0 victory courtesy of a 52nd-minute strike by Chevonne 'Messi' Marsh.

The win improved Cavalier's tally to four points, one above previous leaders Arnett Gardens and two behind Portmore United, who have a perfect record, with six points.

Cavalier looked the better of the two teams for most of the game as they created numerous clear chances and missed them at will. The game appeared to be heading for a stalemate until Marsh, with his bit of magic, stealing behind a defender to steer a cross into the Arnett net, gave his team their first win of the season.

"First and foremost, I have to give credit to the creator above. It was a hard game against the champions, Arnett Gardens, and to come out and execute well and give my team the three points is just a tremendous feeling," the former Jamaica youth player said.

Marsh's composed performance and his strike was an example to his teammates, including his Jamaica youth teammate Oshane Jenkins, who missed a hat-trick in just about 16 minutes of action.

"You know, it comes back down to decision-making in front of goal and executing. It is the early part of the season, so we just have to go back to the drawing board and do some work in front of goal on shooting and scoring," Marsh said of his team's poor finishing.

Of his performance, Marsh said that it was only the tip of the iceberg as there are great things in store.

"This is actually my fourth season in the league, and you can expect great things from me.

"I have a lot to prove this season. I am looking forward to a call-up to the senior team and to take part in the qualifiers going on now. The only way I can do that is to stamp authority in my country right now and to show them that Chevonne Marsh is actually one of the best playing in the Premier League right now," the 21-year-old said.

So serious is Marsh about making the breakthrough that he has broken down his game into things that he is doing well and things that he needs to improve.

"My movement off the ball, the threat I pose when I am driving forward, these are things that I am doing well at.

"I have heard the talk about me lacking stamina and not being able to sustain the intensity over 90 minutes, but I am getting there. In order to get to the next level I have to go back to the drawing board. I used to train twice a day. I am training even more now so that I can last," he stated with confidence.