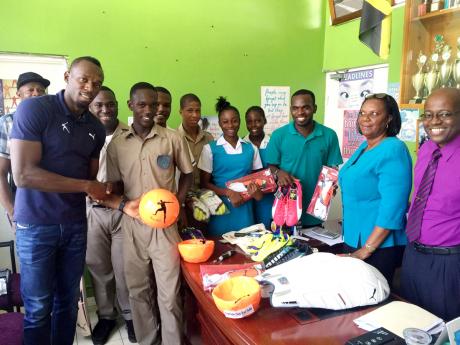 Contributed
Olympic and World double sprint champion Usain Bolt (left) with his father, Wellesley, looking over his shoulder, presents gear to members of his former school, William Knibb, headed by the Principal, Lorna Jackson (second right), at the institution based in Martha Brae, Trelawny, yesterday.

Called upon for assistance after the institution's struggles to sustain its sporting programmes because of financial constraints, Bolt returned to his old school to personally deliver the items, after his triple-gold-medal performance at the IAAF World Championships in Beijing, China.

Bolt won gold medals in the 100m, 200m and 4x100m to successfully retain his titles won two years prior in Moscow and take his World Championships gold medal tally to 11.

Through his long-time sponsor, PUMA, Bolt, who holds world records in the 100m and 200m, as well as a part of Jamaica's 4x100m relay team, delivered 50 pairs of football shoes, shin guards, bibs and self-branded footballs to assist in the school's ongoing participation in the Inter-Secondary Schools Sports Association (ISSA)/FLOW daCosta Cup football competition.

The sprinter also handed over equipment to the school's cricket programme, with several bats, balls, gloves, pads and items of clothing given towards their Headley Cup campaign.

It should be noted that the school's track and field team already benefits from Bolt's association with PUMA, which has been sponsoring the sprinter since 2002, and upon his request, has been providing a full range of gear to the Falmouth-based institution since then.

Bolt, who also donated $1.3 million to offset some of the major expenses, said he is always willing to give back to the school, which he credits for playing a major role in his professional and personal development.

"William Knibb played an integral role in the athlete and the man that I am today. So anytime they call or if there is anything I can do to give back, I'm more than willing," Bolt said.

Bolt, who first shot to prominence while representing the school at the ISSA Boys and Girls' Athletics Championships, attended William Knibb Memorial High school from 1998 to 2003.