I’ll be ready next year – Weir 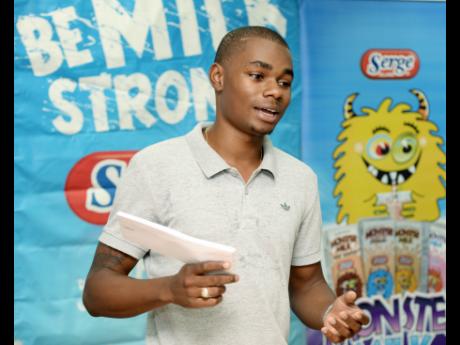 Jermaine Barnaby
Athlete Warren Weir talks about his purpose for giving back to children during a collaboration with Facey Commodity, in a back-to-school handover at the Facey Commodity Merchandise Division yesterday.

Following an injury-plagued season, which culminated with a disappointing semi-final finish at the just-concluded World Athletics Championships, former Olympic 200 metres bronze medallist Warren Weir has vowed to put in some big performances in 2016.

"Firstly, I must say things could be worse; I came out injured, but it's not as bad as it could have been, it was a good season for the country.

"I had my ups and downs - the down was not making the finals (200m World Championships), but I must give thanks to the ups - getting a World Relay (4x200m) gold medal; so I have to give thanks for all that I was able to do," he said.

"This was my second World Championship; it wasn't the best. As a matter of fact, I considered it a failure, but everyone knows the injuries that I have been going through. But I will be ready for next year," he swore.

The 2013 World Championship 200 metres silver medallist revealed that he is still undergoing treatment, but is determined to leave his mark on the 2016 Olympic Games in Brazil and promises to put in a lot of extra work. He also wants to add more muscles to strengthen his slender frame.

"I am still under treatment, but I'm looking to move ahead. But there is no rush to get back to top form, as it's a long season and I'm taking it slowly as it has been steady progress and I will be fully fit and ready to go (when new season comes around)," he reasoned.