Sterling back with a bang for Arnett 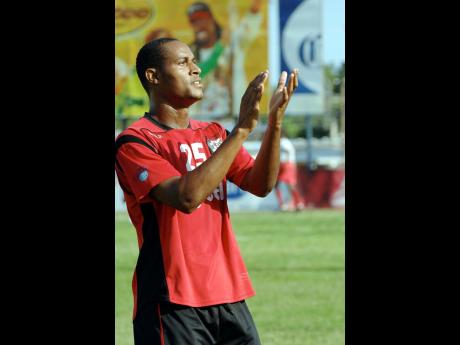 Back with a bang is the phrase that can be best used to describe the performance of Newton Sterling and Arnett Gardens in Sunday night's Red Stripe Premier League (RSPL) game against neighbours Boys' Town.

Sterling, who last played in the League over a year ago, reminded of his striking prowess with a 25-minute hat-trick, and erased the terrible memory of the defending champions' loss to Cavalier on Monday last. Kemal Malcolm was responsible for Arnett's fourth goal in their 4-0 win.

"Three goals in 25 minutes is good. It is always a good feeling to score goals, and to score three in your first game is really a tremendous feeling," said the 30-year-old, who sat out his team's first two games of the season as he awaited his International Transfer Certificate (ITC).

The fact that he was not fully fit made the performance even more special for Sterling, who last season represented San Juan Jabloteh in the Trinidadian League.

"I am not fully fit as I am coming off a hamstring injury, so to do this injured makes it feel even better. I am getting where I want to be, so it is a good sign," he added.

Sterling confessed that observing his team's poor performance in their loss to Cavalier set something off in him and triggered his hat-trick performance.

"Sitting and watching that game was really disappointing; we did not look like the defending champions, and that hurt. Cavalier created about nine or 10 clear chances and could have really won by a bigger margin.

"We got together as a team and said that we cannot play like that again; if we are going to lose, we have to lose fighting. That kind of performance could not be repeated, we pledged," said the 6' 5" Sterling, who stood head and shoulders above everyone at the Anthony Spaulding Sports Complex.

He added: "That Cavalier game kind of opened our eyes. We had to look at ourselves, from forward all the way to the backline. We had to raise our game."

Sterling, who said he declined to extend his contract with San Juan Jabloteh as he wanted to remind the national coaching staff of his qualities and to put himself back in the shopping window, said he had a feeling something good was going to happen.

Sunday's win pushed Arnett Gardens back up into second spot with six points as Cavalier did not see action.