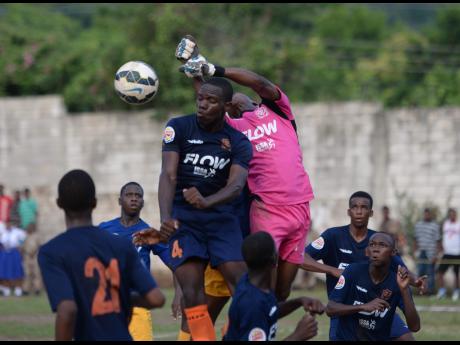 Hydel High will square off against Haile Selassie High in today's feature Group B clash of the Inter-secondary Schools Sports Association (ISSA)/FLOW Manning Cup preliminary round at Cling Cling Oval, starting at 3:30 p.m.

The top two in the group are followed by Dunoon Technical (7), Greater Portmore (5), Papine (4), and Cumberland - without a point.

With the first round of games set to conclude today and the return games to start next week, teams are fighting for top positions in order to advance to the next stage.

"We are on top in the group, but Haile Selassie must be considered a team that can hurt us," Maxwell told The Gleaner yesterday.

"It is early days in the competition, and we are going through how we intend to play," Maxwell, who guided Hydel to the Manning Cup final in 2012, added.

Playing away, Maxwell is expecting at least a point from this encounter. "The worst for us would be a draw. The team has not been at full strength because of tactical reasons," he explained.

Maxwell is expecting leadership on the pitch from captain Dale Reid as well as former national Under-17 striker Nicholas Nelson.

"Well, we are behind Hydel by three points, so the aim is definitely to win. We are playing at home and coming all out for maximum points," Williams said.

He pointed out that due to lack of funding, the team did not have a good pre-season.

He added: "I think we can beat Hydel, but I expect a tactical game from Maxwell.