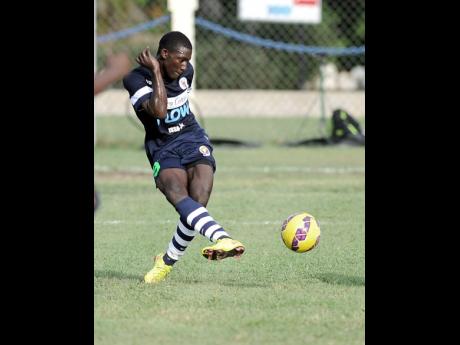 Brown is now in his second season at Jamaica College, and has notched three goals so far this season.

He moved to JC last season from Holy Trinity High, but did not land a regular starting role due to more seasoned players in that team.

This year, however, he is among coach Miguel Coley's main go-to players for the goals needed to defend the Manning Cup, Olivier Shield and FLOW Super Cup titles.

He stepped up with a vital brace in the 24th and 86th minutes for JC on Monday, which saw them beat Clan Carthy High 4-0.

"It is an amazing feeling to score two goals today," Brown said on Monday while noting that he idolises Flemmings, who captained and led JC's scoring charge last season.

"I idolise Flemmings, and Coach has called on me to step up and get goals like he did for our school. We are a championship team, and I am trying to build my legacy without being under pressure of living up to his name," (Flemmings') Brown added.

Meanwhile, coach Miguel Coley said his team is shifting and changing, and he is trying to put the pieces in place as the season progresses.

They will next play Tivoli High at the Edward Seaga Sports Complex in West Kingston, tomorrow.

"We are looking better and better and that is good for us. We have to work on our finishing and keep our noses in front, and continue working hard," stressed Coley, who is also the assistant coach for Jamaica's senior Reggae Boyz.