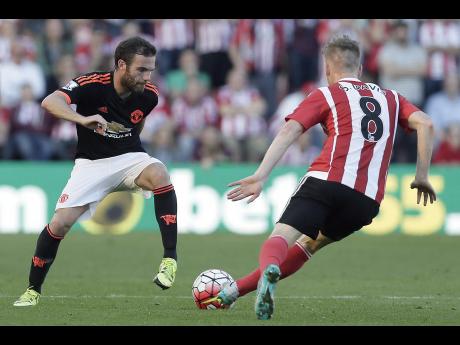 The scoring feats of Sergio Aguero and Harry Kane were unrivalled in the Premier League last season.

Every touch seemed to turn to goals. And yet a month into the new campaign scoring is the one thing these strikers are struggling to do.

Top scorer last season with 26 goals last season, Aguero has netted only once in the league for Manchester City so far.

How Kane would be glad to be off the mark for Tottenham. Last season's scoring revelation went from zero to 21 goals in six months to finish second in the scoring chart in his first season as a regular starter.

And yet as Tottenham prepare to host Manchester City tomorrow there seems little prospect of these misfiring forwards losing their places in the starting XI.

Aguero at least scored in the League Cup on Tuesday as City eliminated Sunderland.

Kane did put the ball in the net on Wednesday against Arsenal only for it to be ruled out for offside in a north London derby when he spurned several scoring chances and seemed short of confidence again.

Kane's drought is biting more because of the lack of goals from his Tottenham teammates: Only five in six matches as the north London club has collected nine points.

City, though, have coped without Aguero finding the net in the league since the 3-0 victory over Chelsea in the second game, with 11 other goals scored. And City are the early leaders, while Tottenham are six points adrift.

It's been a bleak start for the north-east teams. Newcastle and Sunderland have each played six times and failed to win once in the league.

Both were also eliminated from the League Cup this week, with Newcastle experiencing the more humiliating outcome: Losing at home to second-tier Sheffield Wednesday.

"Do we fear it? Do we say we don't want to play in that? We have got to," McClaren said. "We have got to get people ready for Saturday, ready to fight, and one result turns it around.

Newcastle have beaten Chelsea on their last three visits to St. James' Park.

Sunderland, though, have to travel to a resurgent Manchester United, with Dick Advocaat the favourite to be the first manager fired this season.

Advocaat isn't the only manager seemingly fighting for his job. In his fourth season in charge at Liverpool, Brendan Rodgers' future seems equally bleak.

Liverpool only scraped past fourth-tier Carlisle via a penalty shootout to advance in the League Cup on Wednesday.

Liverpool have scored only four goals this season in the league and collected eight points out of a possible 18, looking a shadow of the side that came close to winning the 2013-14 title.

Behind the Manchester rivals at the summit are surprisingly West Ham and Leicester. West Ham host Norwich tomorrow  when Leicester entertain Arsenal.