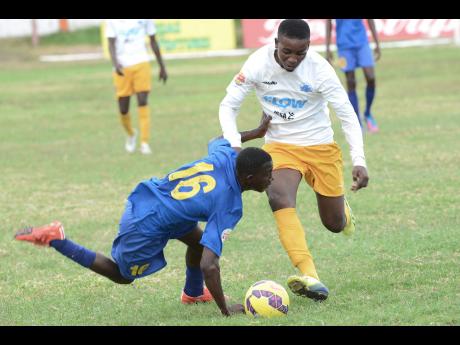 However, Denham Town had their goalkeepers largely to blame, with all three goals coming as a result of goalkeeper errors.

Shawn Beckford fired the visitors ahead after 18 minutes, and although Tarrique Campbell equalised on 40 minutes for Denham Town, Ronaldo Grignion restored Innswood's advantage three minutes later, and Sanjai Nelson extended Innswood's lead from the spot, 12 minutes from the end.

But although Rushane Facey reduced the deficit to one on 90 minutes, the visitors held on for the win and kept themselves atop of the group with maximum 12 points, three more than St George's.

Coach Anthony Thompson says he expected things are getting tougher for his team after their surprise win over St George's, but after yesterday's victory he is confident of completing the double against the 'Georgians'.

"It (Denham Town) was a hard game but you saw the fight that we fight and we prevailed," Thompson commented.

"We have to play more aggressively now, and we will have to move the ball more because we are playing some good teams like St George's on Monday and we have to be prepared for that. Although some injuries are plaguing us we are going to prevail (Monday)," he stated.

Innswood went ahead through Beckford, who beat goalkeeper Andrew Brown to a 50-50 ball that Brown looked favoured to win to score in an empty goal. But Denham Town pulled level when Tarrique Campbell beat Tajan Griffiths with a 25 yards free kick. Three minutes later, Innswood was back in front when goalkeeper, Brown, misjudged a ball into the area and allowed Grignion to score from six yards.

Twelve minutes from the end, Shemar Guthrie beat Leroy Brooks who replaced Brown at half-time with a free kick from 40 yards though the goalkeeper should have done better.

Denham Town got another goal back in minute 90 when Daquan Black was fouled in the area, and Facey dispatched the resulting penalty.