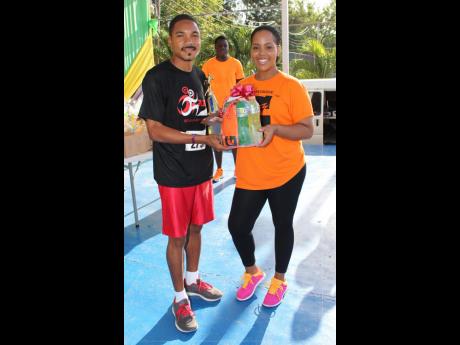 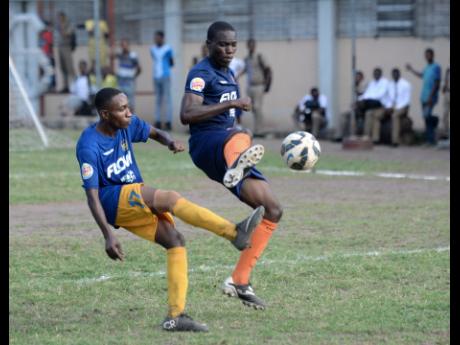 Petrojam completed the Business House football double last Saturday when they defeated the previously unbeaten GraceKennedy 3-2 on penalty kicks in the KSAFA/Western Sports Division One final at Barbican playing field.

The Lennie Hyde-coached Petrojam, which won the knockout title earlier this month, were winning the Division One title for the fifth time in the last six years.

In a closely contested league final, Petrojam and GraceKennedy played to a 1-1 stalemate in regulation and extra time.

Despite having to play with 10 men from the 64th minute when Kerat HoSang was shown the red card for dangerous play, GraceKennedy gained the equaliser from Adrian Coley, his header beating goalkeeper Damion Hyatt in the 83rd minute.

In the Division Two final, Peak Bottling defeated Sagicor Group 2-0 in the final thanks to goals from Maurice Ricketts in the 41st minute and Andrew Morrison in the 84th.

Division One champions Petrojam won a third trophy on Wednesday when beating Peak Bottling 3-1 in the Challenge Shield match at Barbican. Goals from Andrew Christie, Leon Strickland, and Jarron Richards sealed the issue, while Andrew Morrison got a consolation goal for the Emelio Clarke-coached Peak Bottling in the 74th minute.

The Bayside, Portmore-based team assumed a 28-point lead (153-125) at half-time and never looked back.

The teams will now focus on League play, which will resume tomorrow with a full slate of matches.

The George Lee Memorial 5K Run/Walk Road Race is on tomorrow starting at the Portmore HEART College of Construction Services in Portsmouth, St Catherine. Warm-up is at 6:15 a.m., with the race set to begin at 6:30 a.m. Proceeds of the event will go towards a children's scholarship/ grant fund and a senior citizens recreational centre. The entry fee for individuals is $1000. For groups of 10 the fee is $800 per person. George Lee, affectionately called Mr Portmore, was instrumental in Portmore becoming a municipality. He was the first directly elected mayor of Portmore. He is also the only man to serve as mayor twice. Dover Lawrence of Sun City Radio and Dana Thomas of Bridgeport High School were last year's male and female winners, respectively.

Over 90 of Jamaica's best junior players will vie for Titles at The Guardian Life Open Junior Tennis Tournament at the Liguanea Club.

The tournament is scheduled to begin this morning at 9 o'clock with players, vying for trophies. The categories are Boys' 10, 12, 14, 16 & 18 and Girls beginners, intermediary and advanced levels.

In addition to trophies, the winners in each category will also receive points toward their national ranking. The semi-finals will be played tomorrow at 9 a.m. with the finals scheduled to get underway at 2 p.m. The closing and presentation ceremony will follow directly after the finals.

The Portsmouth Primary one-day football rally will be played next Friday, October 2 on the school grounds. Registration is set for 9 a.m., and matches are slated to begin at 9:30 a.m.

Entry fee is $3,000 and must be paid by Thursday, October 1. The main aim of the competition is to promote and develop football within the schools and build the confidence of young players, while providing the experience needed for upcoming competitions. The competition is open to both primary and preparatory schools in Jamaica. The event was last contested in 2013, where McAuley Primary won from Spanish Town. They defeated the host school 3-2.

Unbeaten Passagefort United will host Garveymeade at Myrtle Way when the South East St Catherine Constituency Domino League returns with three games tomorrow. In other encounters, Waterford take on Westmeade Rising Stars at Waterford, while Cumberland are at home against Portsmouth.

Waterford beat Garveymeade 250-226 in their last match. Ken's Wildflower (18 points) beat Cumberland 250-242. Garveymeade (17 points) have dropped to fourth place, while Cumberland are fifth with 17 points, Westmeade, sixth with 11 points. Portsmouth are at the foot, of the table on two points.

Dalton Wint was re-elected to serve another two-year term as president of the Manchester FA at the parish's annual general meeting recently.

In winning his fourth straight term, Wint defeated challenger Duane James 27-14. Baron Watson was returned as first vice-president, but there is now a new second vice-president in Dudley Powell. Powell takes the post that was vacated by Nyron Goodhall. Janice Grant was returned as treasurer and Clarence Jackson as general secretary.

There are two new faces on the executive committee. They are Omar Robinson and Derick Reid. Donovan Senior, Brian Sterling, and Cranston Kelly remain members of the executive.

Orville Henriques showed his dominance of Professional Practical shooting at the local level when he won the latest challenge match dubbed 'September to Remember' at the Manchester Rifle and Pistol Club.

Henriques tallied the maximum attainable score of 670 points after winning all eight stages. It was the highest margin of victory in recent years. Ellsworth Dixon, who finished second on two stages, was the runner-up with 70 per cent, gaining 471 points. Third and fourth, respectively, were female shooter Sue Ann Henriques and Evan Grant.

Cleon Stewart was fifth, Thomas Jones sixth, and Owen Campbell seventh. Young shooter Desmond Prince made the top 10 for the first time with a creditable 246 points.

The fifth staging of the Howie Chin Memorial Football Cup for preparatory schools in Manchester will take place next Friday. Hosts for the opening games and dress parade will be defending champions Mt St Joseph Prep. Start time is noon.

The competition is named in honour of Howie Chin, the former Manchester FA executive and previous owner of Brumalia House, which is also a current sponsor of the Manchester KO Cup.