Charlie Smith on a cruise 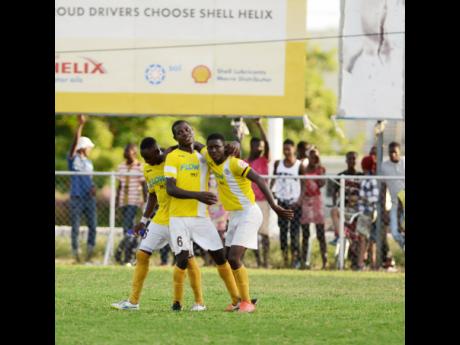 They sit atop Group D with 12 points. They have scored 13 goals, while conceding once.

Despite having a new-look team, Charlie Smith played with their customary flair in front of a passionate Arnett Gardens crowd, which cheered them for the full 90 minutes.

The players left the best for last yesterday. In the second minute of injury time, Omario Fisher struck a 35 metres shot, which lit up the back of the net and left everyone talking about his moment of brilliance. His shot gave goalkeeper Jeadino Waite no chance.

It was a case of hard work paying off for Fisher.

"It was good and perfect. I was working for this (goal) a very long time," said Fisher, who has notched three goals in three appearances in his first year of Manning Cup.

"More and more goals is what I want for the season for the entire team and the staff," stressed Fisher.

It was an even contest leading up to the opening goal, when Ashawn Ricketts sent Charlie Smith ahead in the 56th minute after the goalkeeper failed to collect cleanly. Zamario Sinclair doubled their lead in the 60th minute.

Coach Jerome Waite believes his team proved much fitter than their opponents.

"The game wasn't the best in the first half. We still have a lot of work to do in terms of decision-making, but after 60 minutes in the game, you could see where the fitness level of the Charlie Smith team came to life while the opponents faltered in that area," he told The Sunday Gleaner.

"The talent pool is minimal, based on what you have seen. It is not the best Charlie Smith team, but what they are showing is that they have a lot of character and fighting spirit. We expect them to continue as the season progresses," Waite added.

Meanwhile, STATHS coach, Alrick Clarke, said it wasn't a bad performance, but thought "a few errors" cost them the game. "Hopefully, we will rebound again. This might have been our toughest game of the season," Clarke assessed..