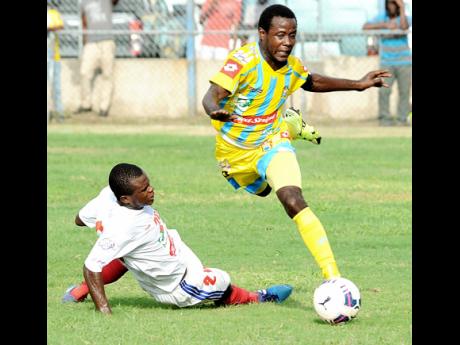 The matchup between the two promoted teams will take the spotlight in this weekend's Red Stripe Premier League (RSPL) on a day when four other matches will take place.

While UWI FC and Portmore United are the two 'new' teams in the league this season, their fortunes could not have been more different. The UWI FC team, who are experiencing top-flight football for the first time in their history, have adjusted to the competition like a cow on ice. They have lost all their matches thus far, and are yet to score a goal.

Portmore United, on the other hand, have settled like a duck to water. Their acclimatisation should not be so surprising as, historically, they have been among the best in the league but for the season they suffered relegation. The St Catherine-based team has wiped away all before them including last season's runners-up Montego Bay United and the competitive Waterhouse.

On the face of it, this match should be a walkover for Portmore United, but assistant coach Jeffrey Hewitt is not holding on to that view.

"The vibes in our camp is really high. The team is really confident, but we are not going to get carried away by the results so far. I know that the UWI team is not getting the results they desire just now, but they have quality. I have seen them play, and I know that it will not be an easy game tomorrow," Hewitt said.

It is not just the quality of the teams that could determine the competitiveness of today's game according to Hewitt. The law of averages could have a say, he reasoned.

"Based on what I have seen of them, they have some qualities, and based on the law of averages something will go right for them at some point, and that could be soon," said the man who has distinguished himself at the schoolboy level.

Marcel Gayle of UWI expressed the view that his team have been unfortunate but held on to the hope that a positive change will come for them.

"We are hopeful that we can get off the mark soon. We are playing well, but just not scoring, and we have been conceding some goals from some schoolboy errors. We have made some adjustments, and hopefully those will pay off for us against Portmore United," Gayle said.

BELIEVING IN THE DREAM

While things have not been going their way, Gayle said the challenge has been to keep the players believing in the dream.

"I have been preaching to them not to panic because there are 90 points out there to get. We just need to get the first one, and we will be well on our way. There is still a long way to go in the league, but we have to be patient and remain confident that we have what it takes," added Gayle who previously worked with the Waterhouse Football Club.

Gayle said that their task against Portmore United will not be made easier by the fact that they will be without five key players including Girvon Brown and Rafique Bryan, but as he put it, "we are short of five, but we are not short of fight".

That fight will be led by the likes of Akeim Thenstead, Kemar Cummings and Mitch Wright, the club's leading scorer in the Super League.

Portmore United will look to former national midfielder Omar Daley for leadership, and it is expected that others such as Ricardo Morris if fit, Paul Wilson, Ishemale Currie and Ewan Grandison will be ready for the fight.

At Barbican, Boys' Town will host Montego Bay United while Cavalier will be looking to get the better of Rivoli when they meet at Stadium East.

Defending champions Arnett Gardens will be fighting the Humble Lions for a win when they meet at Effortville, while the rejuvenated Reno will be looking to add Tivoli Gardens to their list of conquests.

On Monday night, Harbour view will host the struggling Waterhouse.