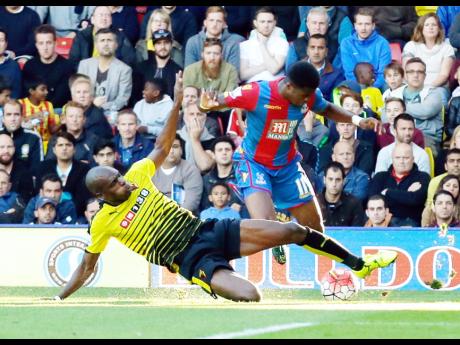 Crystal Palace rose to sixth place in the Premier League yesterday after Yohan Cabaye converted a second-half penalty to earn a 1-0 victory over Watford.

Cabaye broke the deadlock in the 71st minute of a dour encounter at Vicarage Road after Allan Nyom made a clumsy challenge on Palace substitute Wilfried Zaha just inside the area.

It was a repeat of their 2013 playoff final encounter, with a spot kick proving enough to decide the game in favour of Palace.

Despite having plenty of possession it was not until after the interval that Watford came close to getting on the scoresheet. After Almen Abdi had been tripped by Joe Ledley, Jose Jurado stepped up and hit a 25-meter free kick that came back off the crossbar.

The visitors alleviated the pressure by hitting back on the counter-attack.

Watford goalkeeper Heurelho Gomes was forced to push a deflected Bakary Sako free kick behind for a corner before Gayle turned a cross from Sako against the woodwork.

Palace manager Alan Pardew introduced Zaha from the bench after replacing him at halftime in last weekend's defeat at Tottenham.The winger was soon involved, bewildering Nyom with his pace before being tripped by the right-back right on the edge of the Watford box.

Cabaye slotted home and Gayle should have wrapped up the points with a little over 10 minutes remaining, but could only poke wide from close range after Yannick Bolasie knocked down a cross from Zaha.

"I don't smile often but I do smile today because I was really pleased," Pardew said.

"It wasn't our greatest performance but it was a good, professional performance and as manager of the team that makes me happy."