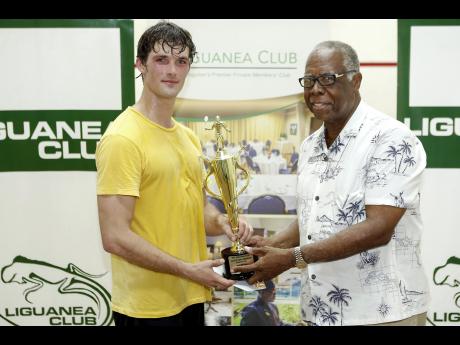 Contributed
Bruce Burrowes (left) accepts his trophy from president of the Liguanea Club Karl James after winning the 2015 Liguanea Open Squash tournament on the weekend.

Tournament favourite Bruce Burrowes rallied from a game down to win the 2015 Liguanea Open Squash Tournament, which was played at the Liguanea Club in New Kingston over the weekend.

As Jamaica's number three, Burrowes was the highest-ranked of the tournament's 56 entrants. However, the senior national team player could take nothing for granted as the competition's handicap structure gave every player a chance to win the title.

In the final, Burrowes went head-to-head with All Jamaica Under 17 champion Tahjia Lumley, who created the tournament's biggest upset when he eliminated defending champion Ashante Smith in the semi-finals.

The in-form junior seemed set to cause more trouble when he won the first game. However, Burrowes broke even after winning a closely contested second game and went on to seal the deal 15-21, 21-20, 21-18, 21-18.

"I knew it wasn't going to be a walkover because Tahjia is a fighter, but once I shook off losing the first game, I just settled down and focused on playing each point, and I came out ahead," said Burrowes.

Burrowes and Lumley won one year and six month's membership at the Liguanea Club, respectively. The membership allows them access to the club's extensive sports, lifestyle and wellness facilities, including the gym, full-service spa, tennis and squash courts as well as the dining rooms and members' lounge.