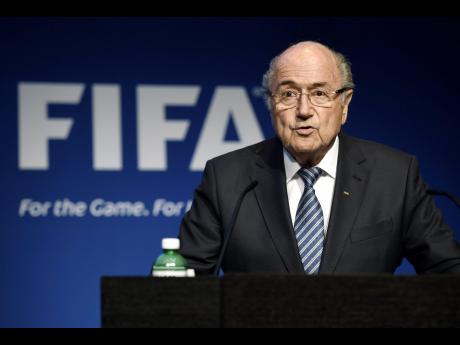 Sepp Blatter told his staff he has done "nothing illegal or improper" and has no immediate plans to step down, the FIFA president's legal team said yesterday.

Blatter was back at FIFA headquarters three days after being interrogated by Swiss investigators at the scandal-battered governing body's headquarters.

Blatter is expected to hand over power in February when an emergency election is held, triggered by the president's resignation statement four days after being re-elected for a fifth, four-year term in May.

But the 79-year-old Blatter does not appear to be planning any sudden exit despite being the subject of a criminal investigation over his management of world soccer.

"President Blatter spoke to FIFA staff today and informed the staff that he was cooperating with the authorities, reiterated that he had done nothing illegal or improper and stated that he would remain as president of FIFA," Blatter's attorney, Richard Cullen, said in a statement.

Romelu Lukaku scored two goals and set up another against his former club as Everton rallied from two goals down to beat West Bromwich Albion 3-2 yesterday in the Premier League.

Lukaku slotted in the winner in the 84th minute with his second attempt after a cross from Gerard Deulofeu to complete the second-half comeback and lift Everton to fifth in the standings.

Saido Berahino and Craig Dawson had put West Brom 2-0 up by the 54th minute, a lead that a Tony Pulis-managed team had never before allowed to turn into a loss in the Premier League. But Lukaku started the fightback almost immediately when he headed in another perfect cross from Deulofeu, who provided a constant threat down the right flank. Lukaku then turned provider with a perfectly weighted pass through the West Brom defence to set up Arouna Kone for the equaliser in the 75th.