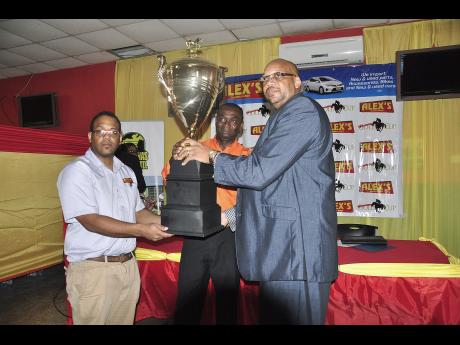 Speaking at yesterday's Alex's Imports Gold Cup launch inside the Trainers' Room at Caymanas Park, Miller said it was fitting that the popular grade one race, with a purse of $1.6 million, would spearhead the running of some truly prestigious races at the back-end of the season.

"In addition to the Gold Cup, this period will facilitate the $10.8 million Supreme Ventures 2-y-o Triple Crown series, which commences in late October, the mile and quarter Superstakes on November 14, not to mention the inaugural running of the Diamond Mile on Saturday, December 5 with a record purse of $13.5 million.

"Already the Diamond Mile is creating a lot of buzz and is the most anticipated race of the year," said Miller. "The season will climax on Boxing Day with the third and final leg of the Supreme Ventures two-year-old series over a mile with a purse of $4.25 million and the grade one Harry Jackson Memorial Cup over 2400 metres on the same day," he disclosed.

Turning to the very popular Gold Cup for which Alex's Imports has contributed $400,000 to the purse, Miller said a crack field is expected to face the starter, including last year's winner, POTCHEEN, the 2013 winner, COMMANDING CHIEF as well as UPPA TUNE, PERFECT NEIGHBOUR, reigning Horse of the Year TYPEWRITER, HOVER CRAFT, ALI BABA, PETE'SWILDONE and the banging-form American horse FORTUNEONEHUNDRED.

"The Gold Cup is such a unique race that it brings together the best of the sprinters and stayers. Over the years, it has been won by such outstanding horses as KILOWATT, who won the inaugural running for trainer Valbert Marlowe in 1967, won again in 1968 and for a third time in 1970, MONTE'S STICH, who won in a blanket finish under the crushing impost of 140lb in 1972, as well as the legendary native bred sprinter EROS who won back to back in 1994 and 1995, HARLEQUIN, HOT LINE, I'M ATISFIED, A KING IS BORD, AHWHOFAH and of course, SAINT CECELIA, who win it in 2009, 2011 and again n 2012," recalled Miller, who added that a number of races on the card will bear the names of Alex Import's products such as Wassy CG Bike and Japanese Tank.

In a short address, Stewart said, "Over the years, the Gold Cup has provided tremendous excitement due to the fierce battles and nail-biting finishes that characterise these races. We at CTL are particularly pleased that Alex's Imports Limited has agreed to once again be a part of this time-honoured event."