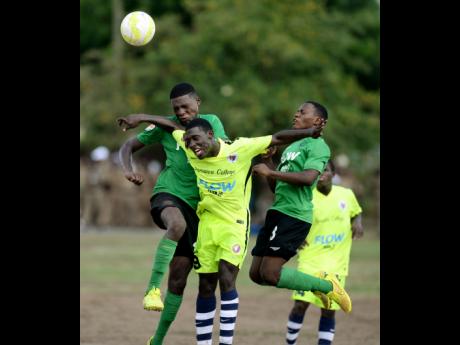 Jamaica College (JC) captain, Allando Brown, who led his team through a fiery Red Hills Road battle at Calabar High, credited the reigning champions' use of new players at the right time for their 4-1 battering of Calabar in their Inter-secondary Schools Sports Association-Flow Manning Cup game, yesterday.

Norman Campbell, formerly of Clan Carthy, struck a sensational brace in minutes 37 and 73 to take his tally to three goals.

Former Charlie Smith midfielder Chevaun Crooks caressed home a side-footed shot from an acute angle, and celebrated coolly even before the ball hit the net for 3-1.

"We have to give credit to the midfield because in the first game, we didn't play anything really in the midfield. The guys step it up a notch today and trust me, it worked out for us," captain Brown told The Gleaner.

"The game plan was to use our youngsters, Norman Campbell and he got us two goals and we give thanks for that," he added. "Everywhere we go, we take over. Jamaica College, we control Jamaica."

The battle was won in midfield, where JC built their attack and swept through Calabar's defence. Even though the first half ended 1-0 to the JC team, Calabar could have pointed to poor finishing.

They equalised in the 67th through Lenworth Reckford, who finished off from a poorly cleared free kick. That seemed to breathe life into Calabar's effort, but it was not to be as JC stamped their class and marched to another win.

"The first round us at Jamaica College is always about rotating and finding the right fix, especially for the last two games so we go into the second round, that's what we have been doing, and seeing the players," outlined JC coach Miguel Coley.