Stewart returns to the US, Tracey joins SprintTec 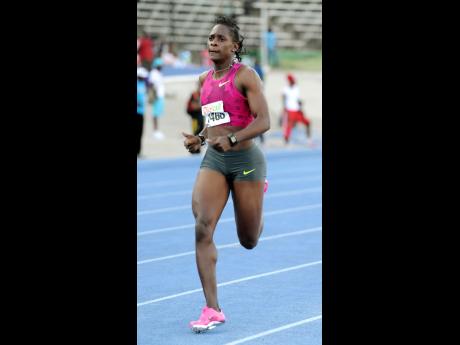 As preparations begin to hit high-gear ahead of the 2016 track and field season, word of more shifting and changing among some of the island’s more notable athletes continue to make the rounds, with Kerron Stewart’s return to the United States highlighting the latest moves.

Stewart, has ended her short stint with the Racers Track Club and is among 12 athletes, which also include Ristananna Tracey, Schillonie Calvert, Allodin Fothergill, Rosemarie Whyte-Robinson and Monique Spencer, who have moved on from the University of the West Indies – based club.

Stewart, a silver medal winner in the 100m at the 2008 Olympic Games, will now join Asafa Powell and Winston Barnes at the Donovan Powell-led Fast Twitch Factory, which is based in Austin, Texas.

Publicist for the group Tara Playfair, confirmed the development, noting that coach Powell, who is the older brother of Asafa Powell, is looking forward to helping Stewart regain her best form and described the coming together as a natural one.

“I think it was a natural and mutual attraction, Donovan (Powell) is a down to Earth kind of a coach and he gets results with a holistic approach,” Playfair said in an interview with The Gleaner yesterday. “I think Donovan is quite confident in getting her (Stewart) back to her best shape, and it also has a lot to do with what he has done with Asafa Powell, he is in the best shape he has been in for the last five years, so it's all about what you are willing to put in, in order to deliver the results.”

Stewart only returned to the island in 2013 after ending a long-standing partnership with coach Henry Rolle in Alabama.

She also finished third in the 200m at the Beijing Olympic Games, added a 100m silver medal a year later at the 2009 World Championships in Berlin, Germany – her last global individual medal. She has however, failed to dip below 11 seconds in her last two seasons and will be looking to regain her best form with the 2016 Olympic Games drawing ever closer.

Whyte-Robinson, a finalist in the 400m at the 2008 Olympic Games and multiple 4x400m relay medallist at the Olympics and World Championships, has reportedly moved to Bert Cameron’s Cameron Blazers group.

Tracey, who has disappointed since turning professional in 2012, following a stellar schoolgirl career, has moved to the GC Foster College-based SprintTec Track Club, where she will work out with coach Maurice Wilson. Sprinter Natasha Morrison, who has left the MVP Track Club, is reportedly close to also joining the SprintTec unit.