All eyes on St George's 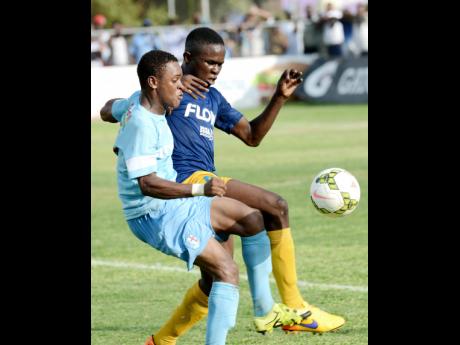 Having turned the tables on Innswood High with a 5-0 drubbing this week, free-scoring St George's College are looking like the team to beat in the Inter-secondary Schools Sports Association (ISSA)/FLOW Manning Cup football competition.

The reigning Walker Cup champions have scored 26 goals and two against in Group C. They lead Group C on goal difference from Innswood. Both have 15 points.

Meanwhile, defending Manning Cup champions Jamaica College have also been impressive. They lead Group A with 13 points from five matches. They drew their first match with Calabar but came back to drub the same school 4-1 on Tuesday. JC have four wins and a draw, scoring 17 goals and conceding four. Calabar are next with eight points - two wins, one loss and two draws.

Hydel High are the Group B front-runners with 16 points from six, winning five, and drawing one, with 15 goals for and three against. Haile Selassie High with 10 points from three wins, two losses and one draw are next.

On top this year

Group E is led by St Jago on goal difference. They have 12 points from five games, with four wins and one loss to second place Wolmer's Boys. The leaders have scored 18 goals while conceding two. Wolmer's have won four from four, with nine goals for and none against.

In Group F, Jonathan Grant have 15 points from six, with five wins and one defeat. They have scored 13 goals and conceded six. Vauxhall are next with 13 points, with four wins, one loss and one draw, scoring eight and conceding three.

Fourteen-time winners Kingston College are a perfect five from five in Group G with 15 points, from five wins. They have scored 13 and conceded one goal while Camperdown have 12 points - four wins and one loss with 17 goals for and three against.