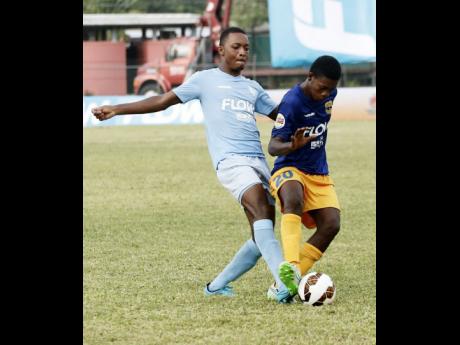 After clobbering Kellits 13-0 on Tuesday, defending champions Clarendon College will look to seal Group H honours and a place in the inter-zone round of the 2015 ISSA/FLOW daCosta Cup Schoolboy football competition when they tackle Edwin Allen High this afternoon.

The rampaging champions looked unstoppable last time out against Kellits to take their tally of points to 13 from five matches and will be equally determined to ease past Edwin Allen (9 points), who they decimated 6-1 on the competition's opening day.

Paul 'Tegat' Davis is aware of the implications should they log win number five from six matches today.

"We have been doing our jobs; the players are settled and focused on winning. It is important that they remain that way in order to defend our title," Davis said.

"A win today over Edwin Allen guarantees us topping the group and that is what we are playing for at the moment," he reasoned.

Edwin Allen will be wary of two of Clarendon's hottest strikers at the moment. Joel Sterling, who logged a hat-trick against them in their first meeting and Seigle Knight, the man who ripped apart Kellits with a four-timer are as dangerous as they come in front of goal.

However, Davis will be the first to admit that their success is built on complete teamwork and that these two players are only part of the whole that makes the champions among the favourites to reach the December 5 daCosta Cup final.

"We play team football and every player is important in this squad. Sterling as well as Knight are part of the team and work for the good of the team. We win together and if we lose we lose together, but we are happy that individually we are very talented and that can only be a good thing for Clarendon College," said Davis.