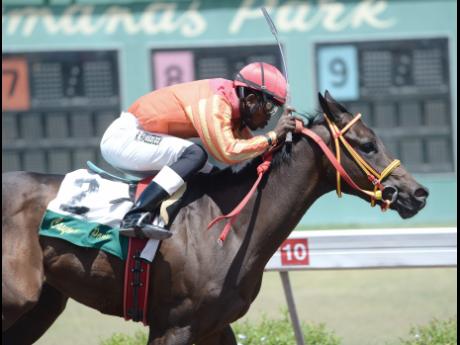 Jermaine Barnaby
DREAMLINER (Robert Halledeen) is one of the top contenders for the Supreme Ventures Limiteds (SVL) Triple Crown Series for native-bred two-year-olds.

Total prize money of more than $10 million will be up for grabs for the 11th staging of the Supreme Ventures Limited's (SVL) Triple Crown Series for native-bred two-year-olds, which gets under way on Monday, October 19.

The series commences with the $2.95 million SVL Cash Pot 'Only One For Me' Trophy over 1200 metres; continues on Saturday, November 28, with the $3.6 million Pick 3 Super Challenge Trophy over 1400 metres; culminating on Boxing Day, December 26, with the 103rd running of the SVL Jamaica Two-Year-Old Stakes over 1600 metres for a purse of $4 million.

Supreme Ventures Limited will contribute total prize money of $6 million to the purses in addition to a $1 million bonus to the owner of the horse good enough to win all three races in the series.

Details were outlined by representatives of Supreme Ventures Limited and Caymanas Track Limited at yesterday's launch in the Trainers' Room at the track.

"This is a series that the horsemen look forward to as it gives the youngsters an opportunity to showcase budding talent early in their development, plus it is the only event on the local calendar that offers a $1 million bonus to the winner of the series," she said.

CTL's racing secretary, Denzil Miller, recalled that the unique sponsorship was launched in 2005, resulting from the merger of Supreme Ventures, CTL, and TOBA.

"In 2013, the SVL series created enormous interest and energy as we welcomed and enjoyed Princess Popstar's outstanding performances in becoming the first horse to win the series," he said.

He added that the Cash Pot Trophy should be competitive as ever with DREAMLINER, VISION, MESMERIZE, FUTURE KING, BUBBLING KITTEN, RUDDY'S BOY, NUCLEAR AFFAIR, GARY GLITTER, and BLUE DIXIE the probable starters.

He acknowledged SVL's commitment to racing in Jamaica through its contribution to not only one, but four major events on the racing calendar the Lotto Classic and the series of three juvenile races.