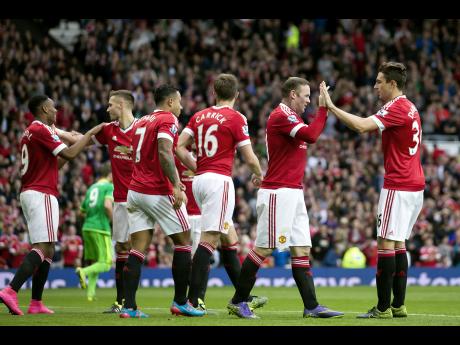 For the first time in 110 weeks, Manchester United enter a Premier League game as the leaders. And a trip to Arsenal on Sunday is the perfect platform for Louis van Gaal's side to justify - and fortify - its spot at the summit.

United swept to five wins in their six September fixtures in all competitions and came from behind to edge Wolfsburg in the Champions League on Wednesday.

"I do feel we are improving," United midfielder Morgan Schneiderlin said. "At the start of the season people were talking about good results and not very good performances.

"In the last few weeks, I don't hear this anymore. They don't complain about the style of play or anything and that is because we have improved."

At Arsenal, though, it's a familiar tale of early-season torment. Arsenal are only three points adrift of United in fourth place but two straight group-stage losses in the Champions League have left Arsene Wenger's team in danger of missing out on the lucrative knockout phase.

"When we play like we did (on Tuesday against Olympiakos), with that lack of concentration and discipline, then we have got no chance," defender Per Mertesacker said. "(Sunday's game) will be a good opportunity to come back to the Emirates and play our football with possession and dynamism."

There was one piece of good news for Jose Mourinho this week: The Chelsea manager will not face any Football Association action over the comments he made to then-club doctor Eva Carneiro during a touchline incident in August.

But independent FA director Heather Rabbatts yesterday denounced the governing body's treatment of Carneiro as "seriously disappointing", particularly over the apparent failure to interview any witness - including the doctor.

On the field it's been a bleak few days for Chelsea as well. After scraping a draw at Newcastle last weekend to slump eight points behind the leaders, Chelsea lost to FC Porto in the Champions League on Mourinho's return to his former club.

Tomorrow Chelsea host a Southampton side sitting a point higher in the league. Both games between them last season were 1-1 draws.

"They will look to react after the loss against Porto in the Champions League," Southampton manager Ronald Koeman said. "They will go up in the table because they don't stay that low for so long. We know what they can bring."

Securing victory over Borussia Moenchengladbach in the 90th minute on Wednesday could be the spark to get Manchester City's season back on track after back-to-back Premier League losses.

"We need to get back to the first five games of the Premier League, where we were more of a balanced team," City goalkeeper Joe Hart said ahead of Saturday's game against Newcastle.

Danny Ings started the season on the periphery at Liverpool after his offseason move from relegated Burnley. Now he's establishing himself as a regular, scoring two goals in the last three games, and has been called up by England.

"He is someone we followed very closely," England coach Roy Hodgson said of Ings, who is likely to partner Daniel Sturridge up front in the Merseyside derby against Everton on Sunday with Christian Benteke still nursing an injury.

The pressure on Liverpool manager Brendan Rodgers eased after a 3-2 win over Aston Villa last weekend, but would ramp back up with a derby defeat.