Back Nelson to make winning return 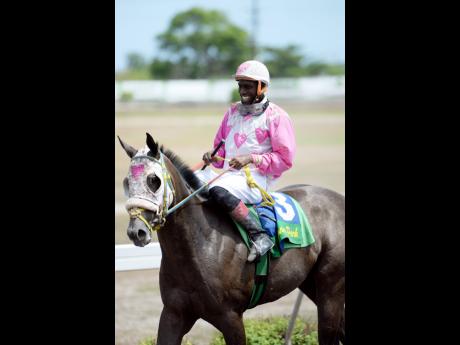 Jermaine Barnaby
Apprentice Linton Steadman is a happy man after getting his first win aboard the Wayne daCosta-trained VISION at Caymanas Park on Saturday, September 26. The two year-old colt is owned by the trainer's wife Elizabeth. 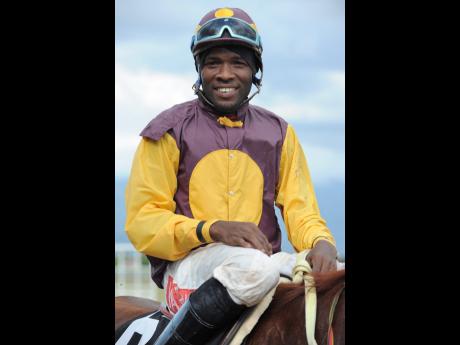 Reigning champion jockey Dane Nelson, who has been riding successfully at Assiniboia Downs in Canada for the past four months, returns to the saddle at Caymanas Park today and should win the opening race over 1200 metres (claiming $350,000 - $300,000) aboard down-in-class SHADE OF BEAUTY.

The Patrick Lynch-trained five-year-old mare showed little behind ITALIANO over this trip on a $450,000 tag last Sunday but has won three races so far this season, and on the strength of her good third to FORCE DE JOUR over 1100 metres on August 29, gets the nod over BELIEVE and AWESOME CODE in a field of seven.

First-time runners ZUGULU, under leading jockey Shane Ellis, and the Wayne DaCosta-trained A THOUSAND STARS (Robert Halledeen up) have both looked well forward at exercise and should fight out the finish of the second race over 1100 metres for native-bred two-year-olds.

It should be close based on their exercise reports, but preference is for A THOUSAND STARS, a bay filly by Storm Craft out of the Natural Selection mare Heart of Gold. The Richard Azan-trained ZUGULU is a bay colt by Hold Me Back out of Candy Girl, who was declared to run in the first race won by Blue Dixie on Sunday but was a late scratch.

VALENTINE BOY, who showed good speed behind MEL AGAIN over 1200 metres some weeks ago, looks the best of a moderate lot of maiden five-year-olds and up in the third race over 1100 metres. Trained by Roy Matthews, VALENTINE BOY (Shamaree Muir up) is steadily improving and can put away WESTERN FAITH and TIZ A CAT in an eight-horse field.

DEMOLITION BOY, with Ellis riding for trainer Welsh Soutar, is preferred to the lightly-raced but improving GOLD MEMBER and GANJA MAN in the fourth race over the straight for maiden three-year-olds. DEMOLITION BOY is well drawn at post position 11 and seems programmed to take this event.

The last two races in the first Super-6 should be won by STAN ROY (Ellis up) and the well-prepared 3-y-o filly JESSE'S FAVORITE, with veteran jockey Ian Spence riding for 14-time champion trainer Philip Feanny. Their respective dangers are MISS ADDI and KING WITHIN.