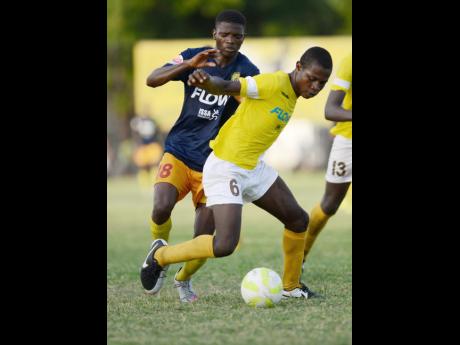 The Charlie Smith team has won all four games in the first phase and will now start the return round. Having beaten Penwood 5-0 in the first game, 'Charlie' should have little problem in winning at home today.

A win for Charlie would push them a step closer to the next stage, and they are fully aware of that. Charlie Smith lead the group on 12 points from four games ahead of Holy Trinity (8), St Andrew Technical (7), St Mary's College (7) and Penwood - without a point.

Coach of Charlie Smith Jerome Waite said his team would be looking to notch another victory.

"Well, the game means a lot as winning would put us one step away from a spot in the second round," Waite told The Gleaner yesterday.

"Making the next round is the test for the team to see where we are. The team is not playing badly, but decision-making and other things need to improve," the veteran coach who guided Charlie Smith to the final last year said.

In another crucial game today, Calabar High, lying in second position on eight points, travel away to third-place St Catherine (7). Jamaica College, who are idle, lead Group A with 13 points from five games.