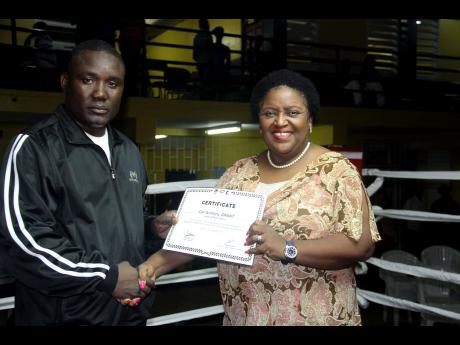 Bruising Gym founder and head coach Carl Grant was praised for his foresight in setting up the gym and congratulated for the work he is doing in the Stony Hill area by Custos of St Andrew Donna Parchment Brown at the gym's seventh anniversary celebrations at the Stony Hill Primary and Junior School last Saturday night.

Parchment-Brown said that it was noteworthy that Grant was taking time to nurture and train his boxers, who, she noted, were doing well both locally and overseas. She urged him to continue doing so as it was a well needed service to his community.

Parchment-Brown also presented Grant with his AIBA 3-Star Certificate, for which he qualified last year. This is the highest qualification in amateur boxing and is awarded by the International Boxing Association (AIBA) after the recipient receives special training and passes the relevant examinations. He is the only Jamaican currently holding this certificate.

Grant told The Gleaner afterwards that he was encouraged by the words of the custos and that this provided him with the incentive he needed to continue working with the young people in the area.

At the presentation ceremony, boxers Felice Groves, Kestna Davis, Michael Gardener, and Omar Campbell were awarded plaques for being the representatives from the gym who have been selected to represent Jamaica in international competition. They received their awards from Winston Chung, a sales representative of Diamond Paints, one of the gym's sponsors.

Three individuals who have made substantial contributions to the gym's growth, and to boxing in Jamaica, were also honoured. They were William Tavares-Finson, who was president of the Jamaica Boxing Board of Control when the gym was founded; Leroy Brown, also a former president and now general secretary of the board; and Robert Forbes, owner of the Olympia Crown Hotel. These awards were presented by Everoy Chin, who is the consul general in Jamaica for the Republic of the Phillipines and a member of the Jamaica Boxing Board.