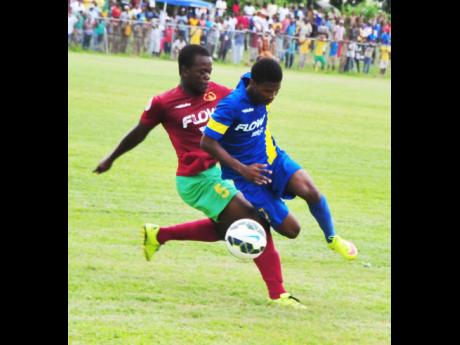 The result was surprising as it was felt another lopsided victory was on the cards for the champions, but Edwin Allen played a stubborn defensive game to leave with a point. Clarendon still lead the group with 14 points, while Lennon are next on 10.

They still need a point to secure group honours and a place in the inter-zone round of the competition.

But the feature game was the Group B clash between Rusea's and Green Island, where national age-group representative Deshane Beckford was at his imperious best for the 'Russians', who came away with a deserved 3-0 win.

Beckford was on target in the 40th and 79th minutes with the other goal coming from Kristoff Young in the 70th minute.

It was win number four from as many matches for Rusea's and coach Aaron Lawrence, who hailed the quality of his team.

"It was a pleasing victory. I thought we executed the game to perfection as we knew Green Island would come at us hard in the first half, which they did, but true quality shone through," said Lawrence.

The brace was Beckford's ninth goal so far, and he told The Gleaner there was plenty more to come.

"I clearly want more goals. The more I score, the more the team benefits, so I am happy. (In) today's game, we played really well, in particular, in the second half, and it showed in the scoreline," stated Beckford.