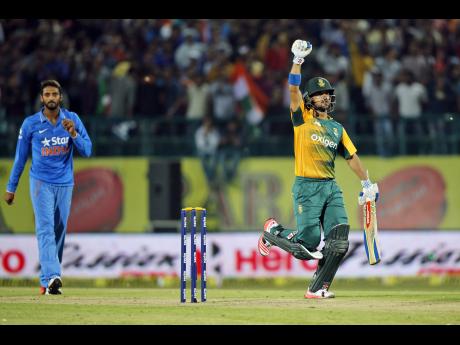 AP
South Africa's Jean-Paul Duminy raises his hand as he completes the winning run during the first Twenty20 match against India in Dharmsala, India, yesterday.

Jean-Paul Duminy struck a power-packed 68 off 34 deliveries yesterday to overshadow a sparkling century by Rohit Sharma as South Africa defeated India by seven wickets in the opening Twenty20 game of a three-match series.

The left-handed Duminy virtually turned the match on its head with his undefeated assault, which included seven sixes and one four, to help South Africa reach 200-3 in 19.4 overs after India had put up a challenging 199-5 in their 20 overs.

In the company of Farhaan Behardien (32 not out), Duminy dominated both pace bowlers and spinners with ease, smashing three successive sixes off left-arm spinner Axar Patel.

Duminy and Behardien shared an unbroken 105-run, fourth-wicket partnership which came after South Africa had slipped from 77-0 to 95-3 after a fine opening stand between A.B. de Villiers (51) and Hashim Amla (36).

"This was definitely one of my best innings," Duminy said. "The way we started the innings was what we wanted in the chase ... It's a long tour for us but we have started well and we are happy with this performance."

Earlier, opener Rohit Sharma again displayed his prowess in limited overs cricket. He became only the second Indian to score a century in T20s with his 66-ball 106. Suresh Raina was the first with 103.

Rohit, the only batsman in the world to score two double-centuries in one-day internationals, also became only the second Indian to score centuries in all three formats of the game after Raina.

Rohit struck five sixes and 12 fours, which included a number of pull shots on a pitch that played true. He shared a 138-run, second-wicket stand with test captain Virat Kohli (43) as the two dominated the middle overs and put the team in a position to score well over 200.