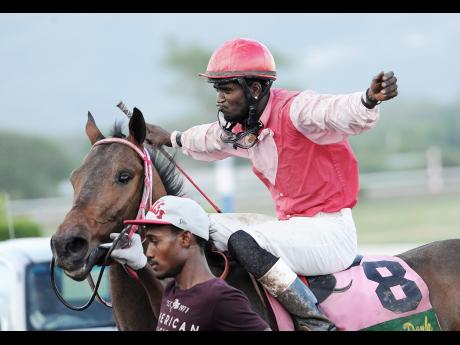 Interestingly, ALI BABA, from the stables of champion trainer Wayne DaCosta, is one of four classic winners this season vying for top honours in a 14-horse field. The others are the 1000 Guineas winner PUDDY POOH, Oaks heroine MOM'S STUDENT, along with SUPERLUMINAL who scored a huge upset in the July 4 St Leger over the distance.

All four have trained well in preparation for this race, but the Harry Parsad-trained SUPERLUMINAL obviously needs it longer, and Parsard will be looking more to his proven campaigner PETE'SWILDONE with in-form Wesley Henry aboard to take home the bacon.

The two three-year-old fillies PUDDY POOH and MOM'S STUDENT were not disgraced behind the speedy FORTUNEONEHUNDRED on September 12 in the Saint Cecelia Cup over 1300 metres and should give good account of themselves, but neither was as good as ALI BABA during the three-year-old campaigns and with the likes of two-time Gold Cup winner COMMANDING CHIEF under returning champion jockey Dane Nelson, UNCLE TAF, and FRANFIELD present, they cannot be given the edge.

Indeed, ALI BABA scored back-to-back fast-time wins (1:31.1) over this trip early in the season before winning the Ash Wednesday Trophy over 1300 metres in a fast 1:18.3 in March. He then beat subsequent derby winner SEEKING MY DREAM in the 2000 Guineas on Easter Monday, clocking a fast 1:37.4 for a mile, and although beaten going two turns n both the derby and St Leger, is more adept at middle distances, and this should manifest itself today.

Although racing for the first time since his close fourth to SUPERLUMINAL in the St Leger on July 4, ALI BABA has been taken to task at exercise by DaCosta, turning in bullet work after bullet work. The 3-y-o cot by Fearless Vision out of the 2009 'Horse of the Year' Ahwhofah obviously has the class to topple this field, and having secured a favourable draw on the outside, will not be easily denied with 51.0kg and in-form stable jockey Robert Halledeen aboard.

Other firm fancies on the 11-race programme are FORCE DE JOUR to make it five in a row in the 10th race over 1300 metres for the Cecil C. Charlton Memorial Trophy; REGALLY BOLD in the ninth; JESSE'S FAVORITE in the sixth; and PERFECT FLYER in the eighth.