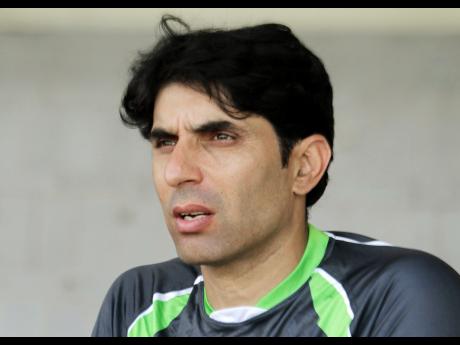 Ageing Pakistan captain Misbah-ul-Haq is thinking about quitting Test cricket, and this month's three-match series against England could be his last in the United Arab Emirates (UAE).

"I have not yet taken the final decision about it (retiring), but I am thinking about it," the 41-year-old Misbah told reporters yesterday.

Misbah has already retired from Twenty20 and also stepped down from ODIs after Pakistan couldn't progress beyond the quarter-finals at the World Cup this year.

The delay in India's confirmation for its scheduled series against Pakistan in December - also in the UAE - is one of the reasons Misbah is contemplating retiring from Test cricket.

If the India-Pakistan series doesn't go ahead, Pakistan's next Test assignment is against England in July next year.

"This is the point on which I am thinking, too. I have to see how I will keep myself ready for the next series because there's not much domestic cricket during this period," Misbah said.

Pakistan defeated England 3-0 in their last Test series in the UAE in 2012, but Alistair Cook's team will be confident after defeating Australia in the Ashes series at home.

"It's not correct to create a perception about our past victory against them," Misbah said. "England is coming on the back of some very good recent performances at home against Australia and they will not be an easy opponent."

Misbah, who scored Test cricket's fastest century against Australia last year in the UAE, will be forming a batting nucleus along with Azhar Ali, Younis Khan and Asad Shafiq, who all played in the 2012 series against England.

Graeme Swann and Monty Panesar were among England's spin ranks in the last series, but now England will be relying heavily on Moin Ali's off-spin to trouble Pakistan's strong middle order on the slow wickets in the UAE.

"Last time their spin bowling was quite experienced and Swann was world's No. 1 bowler in Test cricket, but now they have Moin Ali," Misbah said.

"Yasir and Zulfiqar have given good performances and they did well against Sri Lanka," Misbah said. "I hope that they won't let us down in the absence of Saeed Ajmal and will do well."