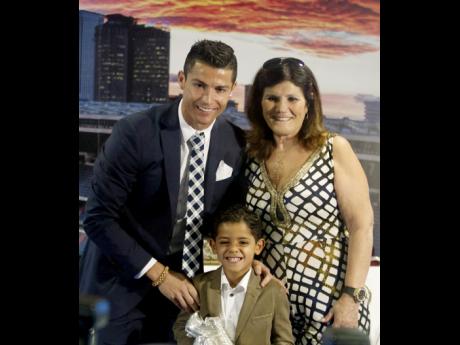 AP
Real Madrid’s striker Cristiano Ronaldo (left) poses with his mother Dolores and his son Cristiano Ronaldo Junior after receiving a silver boot award for scoring the most goals for the club during a ceremony at the Santiago Bernabeu stadium in Madrid, Spain yesterday. Real Madrid paid tribute to Ronaldo, who recently overtook Raul Gonzalez to become the club's all-time highest goalscorer.

The club presented Ronaldo with a custom-made trophy in a ceremony attended by his family and teammates at the Santiago Bernabeu stadium.

After a long video showing Ronaldo's official presentation in 2009 and many of his greatest feats and important goals, including some against rivals Barcelona, club president Florentino Perez gave a speech praising the Portugal forward.

"It's a very emotional day for all Real Madrid fans," Perez said. "One of our own has achieved something that was considered almost impossible to achieve. Only through his talent, his hard work and his determination was this possible."

Ronaldo scored his 323rd and 324th goals Wednesday in Madrid's 2-0 win over Malmo in a Champions League game in Sweden, matching and surpassing the mark previously held by Raul Gonzalez.

Ronaldo also surpassed the 500 mark for career goals in the game against Malmo, reaching 501.

"To me it's an honour to receive this award. I didn't expect it," Ronaldo said. "When I wore Real Madrid's jersey for the first time I never imagined that one day I would become the club's greatest scorer, surpassing my friend Raul and the late (Alfredo) Di Stefano. I'm very happy."

Ronaldo is also the all-time scoring leader in the Champions League with 82 goals, five more than the injured Lionel Messi.

Several of Ronaldo's teammates were present for the ceremony at the Santiago Bernabeu, as well as Madrid coach Rafa Benitez and the player's mother and young son. The 30-year-old Ronaldo posed for photos with all of them after the ceremony.