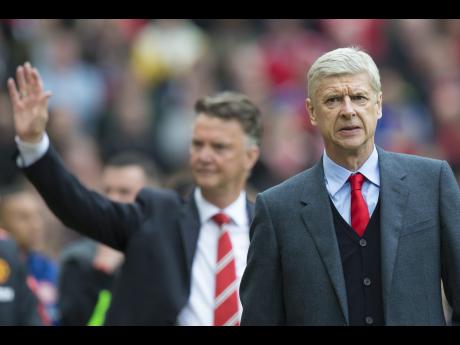 Arsenal lost 3-2 to Olympiakos on Tuesday when stand-in goalkeeper David Ospina dropped a corner over the line and the defence then conceded a third goal immediately after the hosts equalised.

Wenger yesterday launched an impassioned defence of both his team and decision to select Ospina ahead of Petr Cech as he faced questions ahead of tomorrow's Barclays Premier match against Manchester United.

"You come to the game, you judge the game, and you assess if I am right or wrong. I never critiqued that. I accept your judgment of how the team played and your assessment, but I don't have to give you all the information I have to make my decisions," Wenger said. "I make the decision that is right on the day, and I am accountable for the results of my team and the way we play football. ... If you have watched the game and you come down to the conclusion that we lost the game because of Ospina, I question your knowledge of football."

When pressed to respond to Mourinho's comment that there was only one Premier League manager not under pressure, Wenger curtly replied: "Look! Stop that story or we stop the press conference."

As he marked 19 years as manager, the 64-year-old Wenger hit back at the sweeping criticism, having not won the Premier League since 2004. The team is three points behind leaders United after seven games.

"I think you lack a bit of creativity in the press at the moment, that you follow a bandwagon that is very, very, very, very boring. I don't go along with that," Wenger said. "If you have any interesting questions for Sunday's game, I can answer, but apart from that, let's not come back always to the same story."

Wenger was frustrated at what he sees as a lack of proper match analysis by the media.

"One pundit says something on television and all behind that they repeat exactly the same thing. It is quite boring because nobody came out with numbers of this game where the game was won and lost," Wenger said. "It is quite depressing to read that and to hear that - to all come just to the same conclusion and not to have watched well what has gone on on the pitch."

In injury news, centre back Laurent Koscielny is expected to be sidelined for around three weeks with a hamstring problem picked up against Olympiakos. Midfielders Mikel Arteta and Mathieu Flamini remain out.