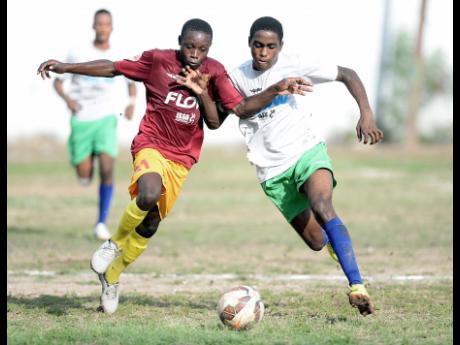 St George's College, strong favourites for the 2015 ISSA-FLOW Manning Cup title, dropped vital points yesterday when they were held to a 1-1 draw by lowly Ardenne High.

The draw ensured that the battle for top honours in Group C remains wide open as North Street-based St George's lead by one point (16) from their seven games. They are currently one ahead of Innswood High School (15) from six games, while Denham Town High have 13. Ardenne are on eight points from seven games.

Elsewhere, an impressive Vauxhall High School climbed to the top of Group F with 16 points from seven matches courtesy of a 4-0 demolition of Spanish Town High at the Vauxhall playing field yesterday.

The Vauxhall team achieved sweet revenge, according to coach Keon Broderick, after they went down 2-0 to Spanish Town in their first match of the season.

Jonathan Grant (15) and former champions Excelsior High School (12) are second and third, respectively, in the group.

A 33rd-minute own goal sent the home team Vauxhall ahead, and that score held until Akeem Whyte slammed home a volley to double their lead three minutes into the second half. Junior Lywood finished off a quick counter-attack to send the Vauxhall team 3-0 up in the 50th minute.

Vauxhall rounded out their biggest win of the season through substitute Rushawn Williams, who came off the bench midway the second half to score a brilliant solo effort. He buried his shot low and hard to the far right-hand corner, leaving goal keeper Keyshawn Doyley rooted to the spot.

Coach Broderick said he was delighted they were able to beat Spanish Town and keep a clean sheet.

"We now have five wins, one loss and one draw, and once the guys remain disciplined and focused, I think we have a good chance of making it to the second round," Broderick told The Sunday Gleaner.