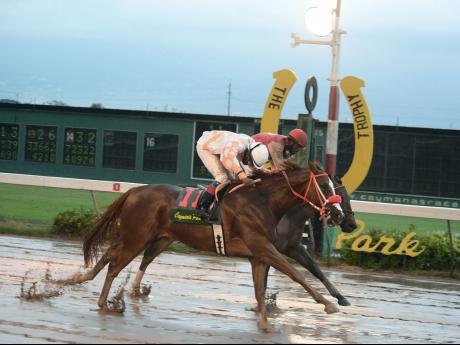 The front-running UNCLE TAF staged a spirited rally in the closing stages to beat 2000 Guineas winner and 3-2 favourite UNCLE TAF by a head in the three-year-old and up open allowance feature over 1500 metres for the Fontainbleu Trophy at Caymanas Park yesterday.

Offering odds of 9-1 in a knotty field of 14, UNCLE TAF provided recent Jockeys' School graduate Jerome Innis with his first winner, becoming the fifth from the batch of 17 who started riding on the previous Saturday to ride a winner.

Running in heavy underfoot condition caused by showers earlier in the day, UNCLE TAF raced into a commanding lead from early to turn for home four lengths clear of ALI BABA and 5-1 chance FRANFIELD.

Although he was reeled in by ALI BABA and headed off a furlong out, Innis did not lose his composure and, flashing the right-hand stick, conjured up a late spurt from UNCLE TAF to regain the lead from ALI BABA under in-form Richard Halledeen within shades of the wire for a narrow win.

A five-year-old chestnut gelding by Traditional out of the Star Attitude mare Zaza, UNCLE TAF is co-owned by the father and son team of Solomon and Owen Sharpe and bred by both. Solomon said of UNCLE TAF:

"He ran too well for third behind Perfect Neighbour in the Governor General's Stakes in grade one company on the previous Saturday and now, stepping down to open allowance company, felt he was light enough to rebound with a win with an apprentice who has worked him constantly at exercise.

"This is a horse who not only won the Governor's Cup (Lotto Classic) in 2013, but finished second in the derby and Superstakes," he recalled. "He has earned close to $9 million in stakes and this was, in fact, his second win in his last four starts," he added.

Earlier in the afternoon, another new apprentice, 21-year-old Bebeto Harvey pushed out 3-5 favourite BORDER LINE for trainer Richard Azan to his first win in the annual renewal of the Cecil C. Charlton Memorial Trophy over 1300 metres for $550,00 - $500,000 claimers.