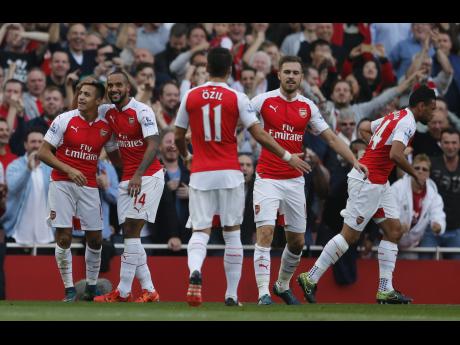 AP
Arsenal’s Alexis Sanchez (left) celebrates with teammates after scoring his second goal of the game during the English Premier League match between Arsenal and Manchester United at Emirates stadium in London yesterday. Arsenal won 3-0.

Alexis Sanchez's superb first-half double helped give Arsenal a 3-0 win over Manchester United yesterday in a dominant display that propelled the London club into second place in the Premier League.

Arsenal decided the game in the opening 20 minutes after a furious start at the Emirates. Sanchez's sublime backheel-flick at the near post opened the scoring in the sixth minute, and Mesut Ozil doubled the lead a minute later when he coolly curled the ball home after being set up by Theo Walcott.

Sanchez's second was a fierce shot from the edge of the area in the 20th after a quick Arsenal passing move. It was Sanchez's fifth goal in two league matches after his hat-trick against Leicester last week.

"That 25-minute period, no one could have dealt with us," said striker Theo Walcott, who set up Ozil's goal and was a constant threat with his pace up front. "That sends a message to the Premier League that we're here to be reckoned with."

The Gunners leapfrogged United into second place with 16 points, two behind leading Manchester City. United are just behind Arsenal on goal difference.

United entered the weekend as the league leaders but couldn't cope with Arsenal's quick passing and high tempo as the Gunners looked like a completely different team to the one that lost 3-2 to Olympiakos at home in the Champions League in midweek.

"We were good because we decided to start strong, to press high," Arsenal manager ArsÈne Wenger said. "When we do that, we can score goals. We know that."

All three goals came after well-worked passing moves. For the first one, Ozil received a pass near the byline and cut the ball back to Sanchez, who, with his back to goal, flicked it inside the near post. Less than a minute later, Ozil set Walcott free on a run down the left. Walcott drew the attention of four defenders in the box before passing back to the unmarked Ozil, who curled in with his left foot.

The third came after Aaron Ramsey combined with Walcott to feed Sanchez, who ran across the edge of the area and cut on to his right foot before firing into the far-right corner.

"When you start a game like that, you can never win a game," United manager Louis van Gaal said. "We lost every duel, every second ball. ... And they can play. They're a fantastic team!"

Ramsey missed a chance to net a fourth before Petr Cech had to make his first real save just before half-time. Anthony Martial spun around Per Mertesacker inside the area and fired low, forcing Cech into a first-class save with his left foot.

Van Gaal made a double substitution at half-time, bringing on Marouane Fellaini and Antonio Valencia for the ineffective Matteo Darmian, who struggled at right back against Sanchez's pace, and Memphis Depay.

"When you give a team such as Arsenal so much space to play, you know you will lose," Van Gaal said.

Van Gaal said United lacked aggression at the start and that he was "amazed and disappointed" at his team's approach to the match in the first half.