'I felt like an outcast' - Spencer, Day explain MVP split 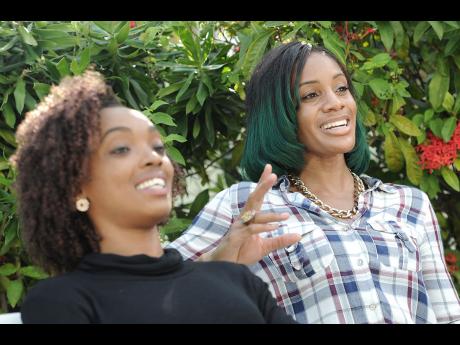 Kaliese Spencer said she felt like an "outcast", while Christine Day spoke of a "break-up" text message.

However, as the two athletes broke their silence about their split from the Stephen Francis-led MVP Track Club, it's clear they have little doubt about the move they have since made.

Spencer and Day, who both said they felt they were not getting the desired attention, have also expressed confidence in their move, having swapped the MVP Track Club for Bert Cameron - the 1983 World champion in the 400m - and his Cameron Blazers outfit.

The Olympians, who for 10 years were guided by the highly-regarded Francis, yesterday spoke to The Gleaner about the developments, while outlining the circumstances around the break-up that dominated headlines last week.

"Maybe I outgrew him (Francis) and I didn't feel I was needed any longer; let's put it that way, I was like an outcast really," said a relaxed-looking Spencer yesterday.

"I just needed a different environment to be more relaxed, I was just not comfortable anymore, and I believe this change will work to my advantage," she added.

Spencer, who with 21 wins in the 400m hurdles on the Diamond League circuit, is the most successful track athlete in the history of the series, thanked and credited Francis for her success.

"First I must say, it (decision to leave MVP) had nothing to do with Christine (Day). I was there for 10 years and was getting a little uncomfortable, so I came to the conclusion that I was moving to a different stage in my life and it was just time for a change and time to move on," said Spencer.

She also paid a lot of credit to Francis and noted she was expecting to have a meeting with the MVP management team before she left, admitting, however, that she had already decided to leave two days before Francis came on local television and stated that she was no longer a part of the club.

"This is something I prayed about before I even made my choice," added Spencer, the 2014 Commonwealth Games champion and World Indoor Championships 400m silver medal winner.

She also explained her reasons behind choosing to work with Cameron.

"I just thought that he was a very kind person. He has a great personality, always encouraging us, even though we were not a part of his club. He always motivated us and that really helped in my decision. Of course, he also did the 400m, is an Olympian and World champion, so that was a great part," admitted Spencer.

"I have seen how he (Cameron) works with his athletes and the attention he gives them, and I know I will improve," Day chipped in.

Day also shared that she was actually told by Francis via text message after this summer's IAAF World Championships in Athletics in Beijing, China, that he would not be able to train her anymore.

The Commonwealth Games bronze medal winner informed The Gleaner that this came after a conversation she had with the coach after her win at the National Senior Championships in June, which led to a disagreement and strained relations between the two.

"It wasn't concrete and he gave it a few days to think about it and I had to prove to him that I could be the same person I was when I just stepped into UTech," she explained.

"We were supposed to have another meeting, but we didn't; he sent a text message to say he did not change his mind," Day recounted.

Day is happy with her choice to join the Cameron Blazers and thanked Francis for his contribution to her development.

"Honestly, I am not disappointed and I am looking forward to the future," she said.

"I thank Mr Francis for all the years he coached me, but I am now looking to the future," added Day, who ran a personal best 50.14 seconds for fourth place at the recently concluded World Championships in Beijing, China, in August.

Cameron, who is working alongside administrator Marvin Anderson to continue the club's improvements, added that he is looking forward to the experience and challenge in working with the two athletes. He believes that together, they will be able to meet their objectives.

Day and Spencer are expected to join their Cameron Blazers teammates, including Leford Green, Jaheel Hyde and Martin Manley.