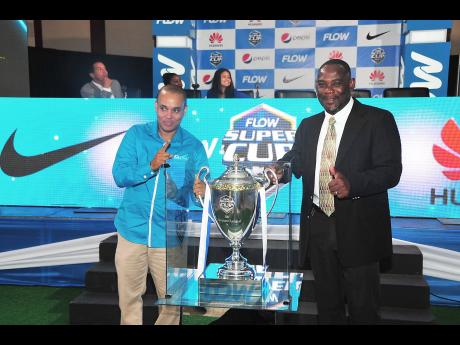 Paul Clarke
Carlo Redwood (left), vice-president, marketing and products, FLOW and ISSA president, Dr. Walton Small, were the first to get their hands on the new FLOW Super Cup after it was unveiled yesterday at the event's launch at the Montego Bay Convention Centre.

The dazzlingly new Flow Super Cup was unveiled yesterday in Montego Bay at the launch of the 2015 edition of the cash-rich schoolboy competition, which, according to Carlo Redwood, vice-president, marketing and products, FLOW, promises more money and lots more fun.

The more than $2 million on offer makes this year's staging a super football event, with all the top eight qualified schools rewarded. This also includes prize money for the Golden Boot winner.

"We remain committed to the players that will participate, the schools that will benefit, an,d of course, the wider community," stated Redwood.

"This is why we modified the event to improve on what we delivered last year and chart the course for this competition, which, we believe, has tremendous potential for growth," he added.

All the qualifiers are set to make $25,000 upfront, with the added incentive from Western Sports that will provide every player with Nike football boots. The overall money will increase with each round for which the schools qualify.

Three venues have been selected to host matches in the Flow Super Cup. These are the National Stadium, Sabina Park and the Montego Bay Sports Complex.

The draw for the first round - which will involve a triple-header and double-header - takes place on October 22, with Match Day One set for October 24 and each Saturday thereafter. The final will be played at a venue yet to be determined, on November 14.

ISSA President Dr Walton Small was delighted with improvements on the Flow Super Cup and congratulated the sponsors for "the most highly anticipated schoolboy sporting event".

"They were the ones with the vision and it's something we are happy about, with their bold innovations, and it is something that has captured our hearts," he said.

Unlike last year when patrons accessed tickets from buying newspapers, this year, they will be asked to pay $500 or $200 to see the matches, or purchase $500 and $200 FLOW phone credit vouchers to get tickets.

A $500 ticket gets a seat at the National Stadium and Montego Bay Sports Complex grandstand areas and a $200 voucher provides access to the bleachers. For Sabina Park, it's a $500 voucher for the George Headley Stand and $200 for other areas.

In addition, there will be a Super Cup Tour on October 7, which comprises visits to the campus of five title contenders.