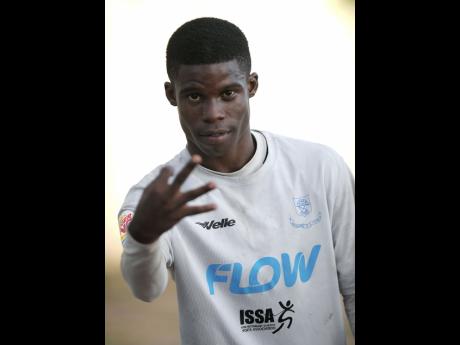 Tyane Wilson netted all three goals in Vauxhall's 3-0 win over Norman Manley, which ended the game with 10 players, in their crucial Zone F ISSA/FLOW Manning Cup fixture at Vauxhall High School, to keep the east Kingston school on track to advance to the next round.

The tricky attacker netted in the second, 22nd and 55th to push his team to 19 points, four clear of second-placed Excelsior and Jonathan Grant, and all but knock out Norman Manley (eight points) from the competition.

Norman Manley's Shamar Reid was ejected on a second yellow card on 53 minutes.

Vauxhall's coach, Keon Broderick, cautioned that the job is not over.

"We are on 19 points and things are looking promising, but we are not there as yet; we still have some more work to do as we have two games to play, two crucial games and that will determine where we finish in the table," he commented.

Wilson picked up an ankle injury in the first-half, which earned Reid his first yellow card, and it was obvious he was not 100 percent. But 10 minutes into the second-half he latched on to a pass over the defence and lobbed the advancing Brandon Edmond to seal his hat-trick.

"That young man (Wilson) is spectacular, he is one of the best forward players in the league right now," stated Broderick.

He added: "Once the boys remain disciplined I have no doubt that we will see it through."

Meanwhile, Excelsior (15 points) stopped Jonathan Grant 1-0 to take second place in the group on goal difference, over the said opponent.

In Zone C, St George's College (19 points) blanked Kingston Technical 7-0 to move three points clear at the top. Innswood (16) slipped to third on goal difference after a 2-2 draw with Ardenne, while Denham Town (16) climbed to second following a 2-1 win over Eltham.

In Zone B, Hydel's (19 points) 4-2 win over Cumberland carried them six points clear at the top, over joint second-placed Papine High, who beat Dunoon Technical 2-0, and Haile Selassie, who stopped Greater Portmore 3-1.