New track up and running at GC Foster 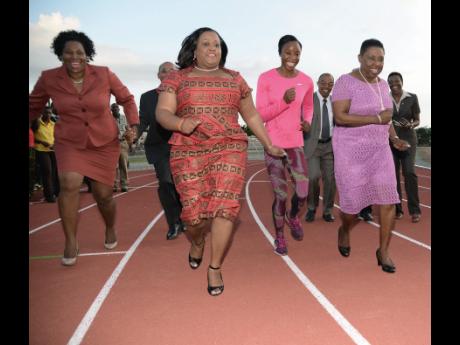 Delivered under budget and within schedule, the new track at the G.C. Foster College of Physical Education and Sport is expected to continue the institution's rich heritage of sporting education. But, it was not an easy fix.

One of the region's premier sports education institution was yesterday presented with a newly constructed $170 million IAAF Level Two certified synthetic running track, two years after it was closed for safety concerns.

And as the who's who of the island's sporting administration turned out yesterday afternoon at the Angels, St Catherine-based institution to get a close-up view of the eight-lane facility - which was entirely funded by the Sports Development Foundation (SDF) and laid by German company BSW Regupol - the German company's point man on the project wore one of the brightest smiles.

Export Director Peter Breuer shared that the project was a rather difficult one, but noted that the new surface can serve the institution for more than 30 years if properly maintained.

Breuer, who first saw a badly deteriorated G.C. Foster College track in 2007 during a site visit, explained that the original track, which was laid in 1998 by the MONDO system, was built on unstable soil and was uneven at several spots.

"I'm very happy with it; it came out beautifully," he beamed. "We had to overcome a lot of problems with the ground, but everything is perfect. We were four weeks ahead of time, within the budget, and everybody is happy."

He added: "The soil was very unstable, particularly along the back straight. The track had deformed up to one metre in spots, so it was like sitting on chewing gum. That ground is still under here, so we had to ensure that the new track is stable and will not deform, and it will not deform because we have put a lot of measures in place."

Breuer noted that he expects a 30-year lifespan if properly maintained. BSW Regupol also built the current tracks at the National Stadium and the University of the West Indies.

Minister with responsibility for sport, Natalie Neita-Headley, who was speaking on behalf of Prime Minister Portia Simpson Miller, said: "This institution has become a national catalyst for great things in sport.

"The achievement of this college goes way beyond merely handing out degrees and diplomas in physical education and coaching. It has been the main driving force behind a new culture of sport in Jamaica.

"This culture has emphasised the importance of study, preparation, practice and training, and the immense value of well informed motivation and a highly educated cadre of coaches across all sporting disciplines," added Neita-Headley.

Simpson Miller is recovering from laryngitis.

"With the provision of this new track we can continue to move full speed ahead with the honing of the many athletes that we have in the G.C. Foster family," she said.