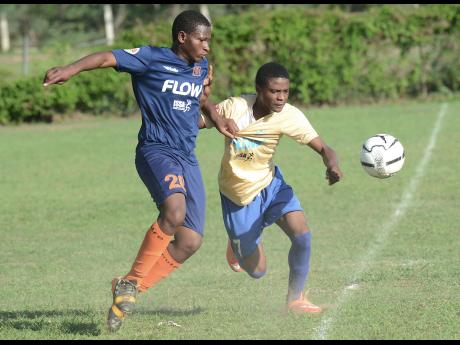 The win gave Cumberland their first points of the 2015 competition. They had lost their previous eight matches.

Dunoon came into the game confident of victory against lowly Cumberland but remained on 10 points with two games remaining. They still have a mathematical chance of advancing to the next round.

James was happy that he was able to score all the goals in his team's first win of the season.

"It's a pleasure to score for the team. They know I am capable, and I went out there and executed. The coach (Wayne Fraser) told me how to play and I followed his instructions," James, a 15 year-old in his second year in the Manning Cup, told The Gleaner.

Fraser added: "The feeling is great! First, thank the Lord for this win today! Well, our senior players are just coming back into the team, so we have been playing better."

On the other hand, coach of Dunoon Gregory Hall was obviously disappointed that his team gave the game away in the dying moments.

"We have so many things to work on," Hall said.

"We led comfortably and then lost the game, but they are youngsters, so I won't come down hard on them. We remain optimistic (of advancing), with two games remaining in the round," added Hall, a former Dunoon goalkeeper.