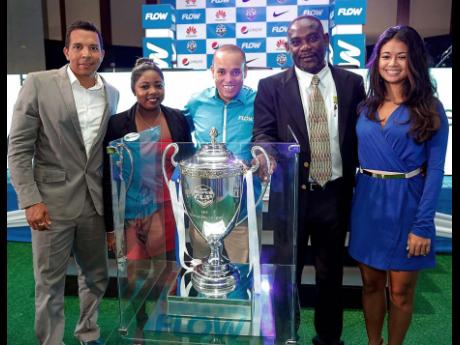 President of the Inter-secondary School Sports Association (ISSA) Dr Walton Small believes that the organisation that oversees schoolboy sports in Jamaica needs to find new ways of keeping the more traditional football competitions relevant or run the risk of having them overshadowed by the increasingly popular ISSA/FLOW Super Cup.

Such has been the success of the competition that offers cash incentives to participating schools that even the traditional competitions - the Manning Cup, daCosta Cup, and Olivier Shield - are paling in comparison. The FLOW Super Cup competition was designed to be the true symbol of schoolboy supremacy as it pits the top eight teams from both competitions against each other for $2.5 million in cash and prizes. The money goes towards football-development programmes at the participating schools.

An estimated 15,000 people crammed into Sabina Park last year to watch the final and many more watched on television as Jamaica College won the inaugural competition. The instant success, Dr Small revealed, put pressure on ISSA to improve upon the more traditional tournaments.

"In terms of excitement, we are aware that the buzz is about the Super Cup, naturally, because of the competition between the rural and the urban and also because there is cash incentive," Dr Small said Tuesday following the launch.

Small revealed that he had discussed the matter with FLOW.

"I said to Mr (Carlo) Redwood, FLOW's vice-president of marketing and content, this is your property (FLOW Super Cup), and we have to make sure that whatever we do with any of the cups it is not to diminish one over the other because it is a property that you have invested heavily in, and you want to get your return, so I am sure that when we put our heads together, we can do something to ensure that the Olivier Shield becomes the real cup of the tournaments."

Redwood is in agreement and said his company would do whatever was necessary to help restore the value of the more traditional tournaments.

"The FLOW Super Cup helps ISSA to view football differently. There is a lot of tradition behind the Manning and daCosta Cup. FLOW is the title sponsor of schoolboy football. We don't want to have a separation of both of them, but we want to move both of them forward for the benefit of the players and the fans, and we believe that there are a lot of opportunities to do that, and we expect that ISSA will be partnering with us in the near future to improve schoolboy football overall as well."