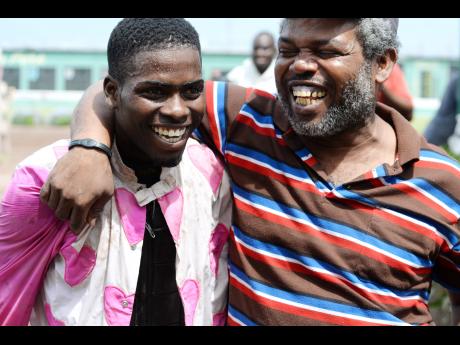 Large and competitive fields are the order of the day at Caymanas Park tomorrow, with all nine races embracing the Pick-9.

The Pick-9 had no takers on Wednesday and the carryover stands at $1.6 million. Both Super-6s start anew with guaranteed minimums of $750,000.

We look at the first Super-6, which gets under way with a 4-y-o and up restricted allowance race over (non-winners of three) over 1820 metres to be contested by nine starters.

This race has a rather open look about it. Horses such as BLACK BOY, NATASHADONTPLAY, PRINCESS SHEMIKA, CHIEF SECRETARIAT, and NO MONEY FRIEND are all capable of fighting out the finish.

NATASHADONTPLAY disappointed in her last two races behind HOLIDAY WEEKEND and COURT CALL over shorter distances, but it should be recalled that when last venturing over this trip on August 1, she failed by only a head to catch SHEBIZ.

I am inclined to give the Uton Stewart-trained NATASHADONTPLAY (Shamaree Muir up) another chance to rebound at the expense of NO MONEY FRIEND under four-time champion Omar Walker and CHIEF SECRETARIAT.

I like the look of ENHANCE PROSPERITY in the third race for five-year-olds and up over the straight in which 13 will run.

Trained by Donovan 'Burru' Thompson, the five-year-old mare finished a close sixth over the straight to to LORD STORM on a $350,000 tag in a claiming race on September 12, beaten by mere 2-3/4 lengths. Back in action, well drawn, and in good nick, ENHANCE PROSPERITY, with promising new apprentice Linton Steadman aboard, should win from GREAT BROWN and YOUR EMINENCE in a field of 13.

Race No. 4 for maiden three-year-olds over 1820 metres (the third in the first Super-6) also looks an open affair in a 12-horse field. The winner, however, more than likely will emerge from a quartet comprising TASHIE BABY, KING WITHIN, MR. GRAND NATIONAL and the one I like best, STIR IT UP, under leading jockey Shane Ellis. Trained by Oneil Markland, STIR IT UP has shown worthwhile ability and now administered Lasix for the first time, this should help her cause.

TASHIE BABY, with 4.0kg claiming apprentice Hakeem Pottinger aboard, and the much-raced KING WITHIN with Walker aboard, are twin dangers.

In the fifth race for $180,000 conditional claimers, MONEYNEVERSLEEP, having chased home the out-of-class LIGHT BRIGADE over 1400 metres recently, is tipped to go one better over 1500 metres, especially with former champion jockey Wesley 'Callaloo' Henry sticking with the ride.

The Bernard Vincent-trained MONEYNEVERSLEEP will report even sharper for this race and gets the nod over TECHNOCAT, JOHN D LINJAH, and TOKICO.

The last two races in the first Super-6 should be won by LEGENDARY PLEASURE (Henry up) and the improving PAPER N LACE, with new apprentice Oneil Beckford aboard. Their respective dangers are GRAN CORAZON and RAJ KAPOOR.