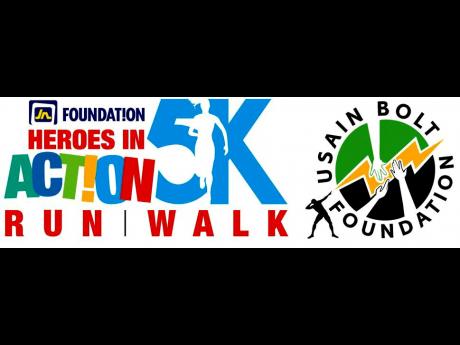 "Come out and run with me; discover my parish and support a worthy cause."

That's the message from superstar sprinter Usain Bolt, as the 'I's are dotted and the 't's crossed, ahead of the inaugural Jamaica National Building Society (JN) Foundation Heroes in Action 5k Run/Walk, set for Sunday, October 18.

Geared towards raising support for the Granville Place of Safety for Girls, the course will take participants through one of the island's most picturesque corridors - where Georgian artistry meets Caribbean charm, a point that Alfred Francis from race organisers Running Events was quick to underline.

However, the opportunity to rub shoulders with one of the most recognisable faces in international sports, Usain Bolt, who was born and raised not too far away in Sherwood Content, will no doubt be a big draw for the road-running community, as well as the casual participant.

Bolt told The Sunday Gleaner yesterday that he is looking forward to taking part in the event and encouraged everyone to join him.

"I'll be there, and I can say that I'm really looking forward to this event. I can't promise that I will do all 5K, but I am ready for any challenge. I do not intend to lose another race before I retire," he laughed in reference to last week's 'made-for-TV' race with eight-year-old viral video fitness enthusiast DemarJay Smith on the popular Ellen Degeneres Show.

"This event is in aid of a worthy cause, one that the Usain Bolt Foundation is honoured to lend its support to," added the 17-time Olympic and World Champion sprinter.

Saffrey Brown, JN Foundation general manager, reiterated the importance of the event and what it means to the future of its charity, the Granville Place of Safety for Girls.

"There have been a lot of issues recently about protection for young people, and we really wanted to look at how we could help them get a better sort of start and increase their chances for positive outcome," Brown said.

She underlined that proceeds from the run/walk will be used to build a classroom, media library and sewing room for the facility, which caters to at-risk under-aged females.

Speaking to the route itself, Francis said that the reception has been positive, while promising an enriching experience for all participants.

"I see a lot of emails floating around from running groups planning to take a ride out of town and participate. Of course, we have a concentration of road races in Kingston, but it's a holiday weekend. A lot of persons want to go out of town, go on the North Coast, and so we are providing something for their palette," Francis said. "There is no race in Falmouth, so for the people in the town, the schools in and around the area, in Montego Bay, Ocho Rios and so on, we also want them to come out and share."