KC too good for C'down 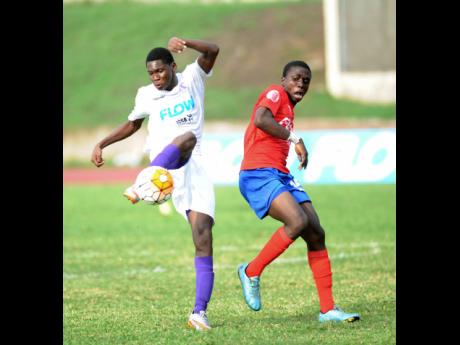 Yesterday, they completed their preliminary-round fixtures with a 2-0 run over Camperdown High at the Stadium East. The win lifted KC to 22 points from eight games in Group G. The second round and FLOW Super Cup qualifiers are ten points clear of Camperdown, who remain second in the group on 12 points, two ahead of Jose Marti High. Both schools have played seven matches.

Dashawn Donaldson and Ericardo McNish were the scorers for KC yesterday, and coach Ludlow Bernard, who said he rested three key players, was happy with what he described as the same quality output from his team.

"Our motivation today was to maintain our unbeaten record. That was the real motivation today, and although I would have switched up some of our players, it didn't really make a difference. They knew what they had to do to win," he assessed.

With rumours swirling among the KC supporters that coach Christopher Bender's job is on the line for poor results this season, Camperdown's assistant coach, Stanford Patrick, told The Sunday Gleaner they had no fear for their jobs.

"We are here, we are doing our best. Sometimes, you have spectators saying this and past students saying that, but no fear from us for our jobs. Whatever happens, you will see in 2016," he said.

Elsewhere, defending Manning and FLOW Super Cup champions Jamaica College cemented their place in the next round with an easy 3-0 rout of St Catherine High in Group A.

In Group C, Innswood High moved to the top of the table with 22 points courtesy of a 2-1 win over Eltham. They are three points ahead of St George's College and Denham Town. All three schools have played nine of ten preliminary-round matches.