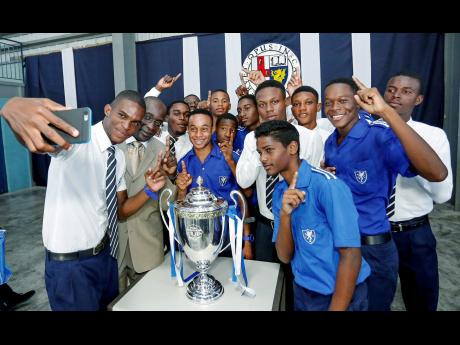 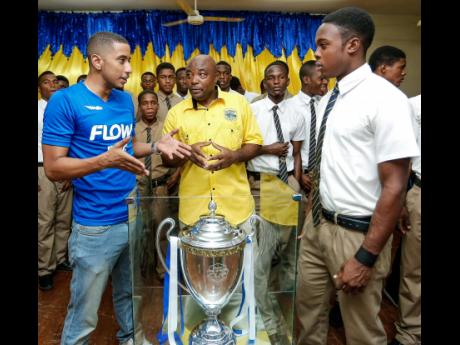 Since the launch in Montego Bay last week Tuesday, administrators of both schools have weighed in on the possibility of the new 2015/16 ISSA FLOW Super Cup title being copped by their respective teams.

During the first stop of the Super Cup 'Tour', last week Wednesday, the new gold-embellished trophy, manufactured in Italy, was unveiled to a full room of students by Clarendon College's principal, David Wilson, and Stephen Miller, sponsorship manager at FLOW.

Head coach Paul 'Tegat' Davis, who is on his second tour of duty at Clarendon College, along with members of the team, revelled in the excitement as they kicked off their campaign for Super Cup glory.

Not daunted by the victory of a Manning Cup team in the inaugural staging last year, Davis says his team is ready to take home the brand-new trophy.

The former player who starred for Jamaica says his boys are hyped and ready to right the wrong.

"The guys are upbeat. They are looking forward to it. We have six players from last year. They were caught napping last year, and the mistakes they made they do not want to repeat," said Davis.

"We intend to fight hard like champions to retain our trophy. We don't like to lose; we like to win all the time, so it is very exciting to have this additional competition."

Reid thinks that Jamaica College will be right there when the trophies are handed out this year.

"We don't like to tell persons that we are going to win everything; we play to win everything," said the confident school master. "As the competition goes on, we improve. We say watch out for JC because we have the reputation as the number-one school for champions."

When asked about the million dollars the triple champions collected last year, he said: "We put it in the pool of funds we use for sports. So I would say it helped to replenish our resources."

The ISSA/FLOW Super Cup competition will see the top-eight teams from both the ISSA/FLOW Manning and daCosta Cup competitions engaged in a fierce four-week knock-out, to take home a whopping one million dollars for the winner. All 16 participating schools will receive a starting $25,000 for qualifying, with the total monies gained increasing as the competition advances.

A draw to determine the starting match-ups will be held on Thursday, October 22, with the lucrative competition scheduled for kick-off two days later.