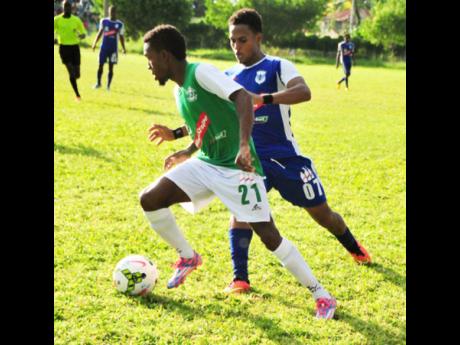 It was a derby with a little of everything involved: yellow cards - four of them to be exact - crunching tackles, missed chances and, of course, the main ingredient, goals. And at the end, the visitors broke the hearts of their hosts.

Montego Bay United swept into the top spot in the standings on 13 points, the same as Portmore United, but with a superior goal difference, while FC Reno dropped one spot to third.

Williams struck his first goal in the 29th minute to cancel out Roshane Sharpe's sixth-minute goal for Reno, then shattered Reno's plans with an 86th-minute poacher's goal.

Sharpe profited from a defensive error that was initiated by goalkeeper Jacomeno Barrett, who bowled the ball out to his central defender, Cardel Simpson, who had difficulty controlling the ball.

Then, in an attempt to clear the ball, it took a deflection into the path of Williams, who picked his spot to open the scoring.

Reno goalkeeper Ashek Taylor mishandled a Williams shot from just outside the area and the ball slipped through his hands and legs and over the line to make the score 1-1.

Williams added insult to injury when he popped up to poke the ball home in the 86th for Montego Bay's go-ahead goal, to seal the victory.

"They jumped on us early with that goal, but we fought back to level things up. I thought we played a really sound game today (yesterday) to earn the win," MBU coach Tim Hankinson said.

He reasoned that his team needs to tighten up defensively if they are to avoid conceding cheap goals and stayed clear of blaming goalkeeper Barrett for the goal.

Michael Graham, the Reno coach, was left bitterly disappointed, but noted he was pleased with aspects of the performance.

"We are already looking to the next match. I think although we conceded late on to lose this game, we played well," Graham said.