I want to run under 19 seconds - Bolt 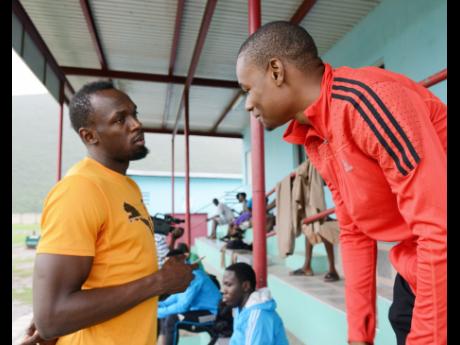 A tough, yet successful season now behind him, sprinting supremo Usain Bolt will today take his first steps towards a dominant 2016 season, with the Rio Olympic Games and a new 200m world record topping his 'to-do' list.

The 17-time Olympic and World champion and double sprint world-record holder said he is looking forward to again squaring off with all his rivals, including American Justin Gatlin, as well as returning training partner Yohan Blake.

Bolt, who reported to the Racers Track Club training base at the University of the West Indies yesterday - in pouring rain to kick off his background sessions - shared the highlights of his vacation, the drive going forward and ambition to lower his 19.19 world record in the 200m, during a chat with The Gleaner.

In high spirits after a series of promotional appearances featuring the popular syndicated US TV show, The Ellen Degeneres Show, Bolt and his clubmates were later given the day off by coach Glen Mills, due to the inclement weather. It is, however, clear that the sprinter's head is in the right place - his job is not done.

"I'm just happy to be back, I've been looking forward to it. I enjoyed my vacation, but it's really good to be back in training," said Bolt.

"I am looking forward to the next season. It's the Olympics, so I know that this will be one of the toughest seasons for me, and I am happy that I could finish the last season injury free - which is key - so I can go into the season fit and ready, and I can push myself to the limit," Bolt added.

"It's going to be big, and it's going to be exciting because I really want to do extremely well at this one and push the barrier. So I am looking forward to it," added Bolt.

The big Jamaican recovered from a suspect start to the season to successfully defend his sprint titles at the World Championships in Beijing this summer, winning the 200m in 19.55 seconds - his fifth-fastest time in the event.

more left in the tank

Still, he is convinced there's a lot more left in the tank and confident that, given the right circumstances, he will break the 19-second barrier.

"The 200m world record is one of my major goals, and one of my toughest. It's going to be hard to find the right day and the perfect race to get this, but I really want to run under 19 seconds. I, personally, think I can do it, and so does my coach, so it's just about putting in the work and finding the perfect time to do it," Bolt said, noting his anticipation of an increasingly competitive season.

"I live for competition. It's one of the joys to go out there to compete against the best because when you beat the best, it shows that you are the greatest. I look forward to my teammate, Yohan Blake, coming back; I'm looking forward to the competition. It should be fun, and it makes the sport much more exciting," said Bolt.

Bolt is looking to win gold medals in the 100m and 200m at three straight Olympic Games.