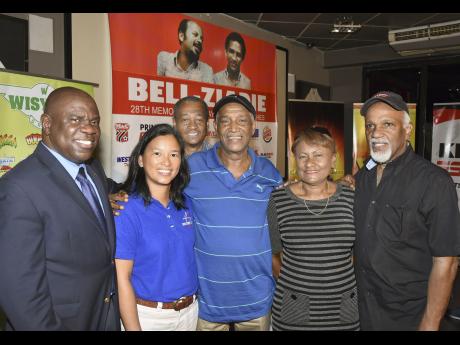 Friendship and family was the unofficial theme at the launch of the 28th renewal of the annual Bell-Zaidie Football Memorial at Cuddy'z Sports Bar and Restaurant yesterday, with each speaker emphasising the strong relationships that exist between the supporters, participants, family and friends of the yearly football celebration of the lives and contribution of two the nation's most influential football men, Winthorpe ‘Jackie’ Bell and Dennis Zaidie.

Lorna Bell, the widow of Jackie, was the first to highlight the strong ties which exist between all those who support this well-loved event, which will be staged at St George's College’s Winchester Park on Heroes Day, next week Monday.

"For 29 years, Clive “Busy” Campbell, Vaughn "Bunny" Goodison and all the Bell-Zaidie committee members have stayed the duty to make this a reality and the only thing I can says is how important friendship is,” she emphasised.

"Friendships are life-savers. But like anything precious you must pay attention to it and treat it with love, kindness and care," she continued.

"Jackie and Dennis believed in friendship, they even shared their football gear and they died together and that is why we are all here for another Bell-Zaidie Memorial," she commented.

Stephanie Chin See of long-time sponsors Western Sports, noted that it was more than a football event to them.

"We are pleased to be a part of this event as it is much more than football, it's family and it’s friendship," she stated.

Michael 'Bedi' Walker, a former St George's College Manning Cup player, stated that they are all like family.

"The Zaidie family is very grateful for carrying on Dennis’ name like that ... but we are like family," he said.

Lorna Bell also encouraged patrons, participants and supporters to come out and foster even more long lasting relationships on the day.

"Let us have fun and fellowship, let us forge friendships on Monday, October 19," she added.