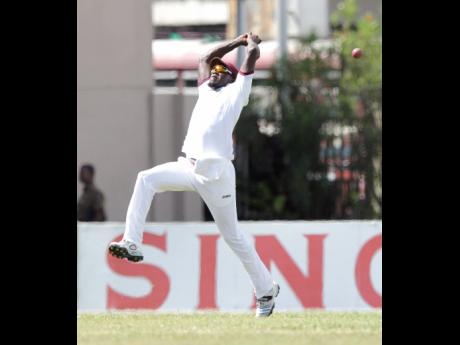 Interim West Indies head coach Eldine Baptiste yesterday praised his bowlers for their commitment on a slow track, but said dropped catches put a blemish on the performance on the opening day of the first Test.

Asked to field first, the Caribbean side's bowlers toiled with little success as Sri Lanka piled up 250 for two, behind opener Dimuth Karunaratne's unbeaten 135 and Dinesh Chandimal's 72 not out.

"They (bowlers) put the hard work in and bowled brilliantly in the circumstances. It's just that they (fielders) dropped a few catches which we would have liked to have caught and that would have made a big difference," Baptiste told a post-match media conference.

"The score could have been 220 for five and instead it is 250 for two. So we've just got to go home, recover and come back tomorrow and get the ball in the same areas and, hopefully, make sure we take our catches."

He added: "(The pitch) was a little bit slower than what we expected, after playing the practice match. The practice match would have played up in Colombo. It (pitch) had some grass and a little more pace.

"This one is a little bit slow, but, hey, this is Sri Lanka. There are no complaints. The bowlers again have done a wonderful job. It's just that we missed a few chances and that made the difference today."

Chandimal was handed a life on 11 by Jerome Taylor at mid-on off leg-spinner Devendra Bishoo just before tea, while, earlier, Lahiru Thirimanne (16) was dropped on six by Darren Bravo at slip off Taylor, mid-way through the second session.

The Chandimal miss proved costly as he went on to add an unbroken 149 for the second wicket with Karunaratne, to give the hosts the advantage in the contest at the Galle International Stadium.

"When you're fielding in the slips, as soon as you lack concentration a nick normally comes, so when you're in there, if 600 balls are bowled in a day ,you've got to be on the ball 600 times. I think that's just what happened today," the former Test seamer explained.

Though West Indies failed to make major inroads into the Sri Lanka batting, Baptiste said there were positives to be taken from the day's play.

He pointed to the way Jason Holder, in his first Test as captain, handled the side and the good mood in the camp despite the long day in the field.

"We have a new captain and I thought Jason did extremely well. Everything that has been thrown at him, he's handled it very, very well so you couldn't ask for more," he noted.

Baptiste, a Test selector, was a last-minute replacement for usual head coach Phil Simmons, who was slapped with a suspension by the West Indies Cricket Board for controversial comments critical of the selection process. And despite the disruption to the squad, Baptiste said the players were responding well.

"So far, to be quite honest, since I've been around, everything has been good. The guys have worked very well, they've been very professional. Honestly, I have no complaints and that's the way to go forward."