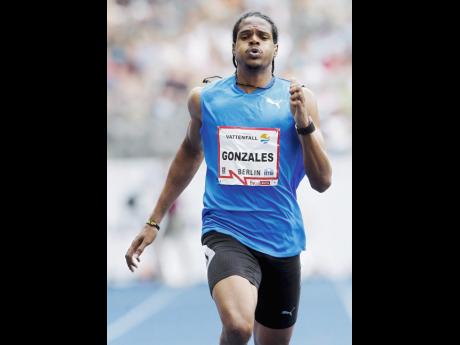 Last season, former Jamaica 400 metres record holder Jermaine Gonzales didn't participate at a major championship and he didn't win a race. But for the injury-prone athlete, it was a very positive season, as for the first time in many moons he completed a season without being restricted to the treatment table or without suffering any major relapse in his preseason.

The Gleaner caught up with the former Tacius Golding High School quarter-miler recently and he revealed that the persistent hamstring problem that limited him over the last few seasons is now further behind him. Also, he is eyeing a spot on the Jamaica team to the Olympic Games next year in Brazil, despite increasing competition from young stars coming up in the event over the last year or so.

"For me, last year was recovery from a long-term injury and it was good, as I actually got a chance to run a couple races and build on the strength in the muscle, and now I am actually back in training a month now and it's going good.

"This injury was a serious injury; probably a lot of people would have stopped after an injury like this, but the fact that I was out there competing again means a lot to me.

"Now the injury is gone," he beamed, "the muscles are getting stronger and I am really looking forward to try making the team to Rio."

Gonzales is very positive that as long as he can avoid any recurrence of the injury and return to his best form, he will be working overtime to accomplish his goals.

"I believe in myself and my talent and the team around me now and they really motivate me to carry on. I definitely see the future bright and as long as I don't have any recurrence of this injury, it is going to be a good season for me.

"Injury is always my problem. The talent is there, so for me it's just doing the things that are necessary and keep praying and hoping I stay healthy," he continued.

"The aim is to make the team to Rio, it's the Olympics and it's Brazil and everybody wants to be there, so I will be doing everything in my power to stay healthy and get back into some good shape so I'll be on that team," added a determined Gonzales, who is a member of the Cameron Blazers Track Club, which is coached by former 400m World champion Bertland Cameron.

"I know coach Bert Cameron has been there and done it before, so I am just staying focused; listen to his instructions, keep working hard and stay strong and I know things will work out," he concluded.