Jamaicans getting in line for Rio 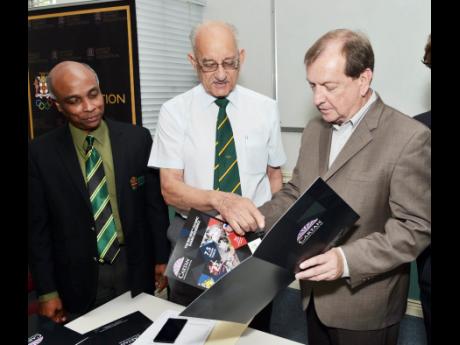 It looks like there will again be a heavy Jamaican presence at a major international sporting event, with indications that Jamaicans have been gobbling up tickets to next summer's Olympic Games in Rio de Janeiro, Brazil, with more than 500 tickets bought through the ticket lottery.

However, president of the Jamaica Olympic Association, Mike Fennell, is urging local fans to act quickly to secure the remaining tickets and packages before it's too late.

Cartan Global is the exclusive authorised ticket reseller and tour operator for next year's Olympic Games in Rio de Janeiro for Jamaica and 35 other countries in the Caribbean, Latin America and Europe, with the organisation's director, Jay Price, promising Jamaican fans an unforgettable experience at the August 5-21 spectacle.

Price, speaking at a press briefing held yesterday at the JOA offices at Cunningham Avenue in Kingston, said he is looking forward to again welcoming Jamaican fans to his company's sports travel experience and highlighted the various ticket and tour packages on offer.

"It's extremely important for us to have Jamaican presence in what we do, in our packages. Especially at the last few Olympics, the Jamaican teams have done extremely well and the world's focus is on Jamaica and it's a really important market for us," said Price.

"Some of the best athletes have come from Jamaica, everyone loves the Jamaican team and follows the Jamaican team, so for us to be working and being a part of what's going on in this country with the Olympic movement is extremely important," added Price.

The agency has received 20,000 tickets for all sports for its markets in its first allocation from the International Olympic Committee and although there is still some availability, smaller venues in Brazil when compared to previous Olympics, means that there are limitations.

"We are very pleased with the reception. I wish we could make the stadium larger, I wish there were other things we could do to accommodate everyone, but we are very pleased with the response. We love working with Jamaica and we are going to do everything we can to ensure that everyone who travels to the Olympic Games from Jamaica have a beautiful experience," Price added.

Stand-alone tickets are also available for fans who are not interested in full packages, while Price also noted that spectators who prefer to stay for periods outside of a particular wave can also be accommodated.

"We had great interest back in May during our lottery process. We have got some tickets remaining in the morning sessions. A lot of the tickets that we have for the evening sessions are tied to our packages, but regardless, it's important that people who are interested in going to the Games, go online and register," added Harney.

Fennell, underscored that tickets are limited and cautioned against last-minute applications.

"This is my great worry - that a lot of persons will come on at the last minute, thinking they can get tickets. Luckily, the Jamaicans who have gone to previous Olympic Games - quite a large number of them - have already secured their tickets," Fennell said.

"There are others who have been excited since the Beijing performances and they have now come on board and they want their tickets, but there are limitations.

"The capacity of the stadium is less than that of London, although we got the same number of tickets available to us," Fennell warned.

Cartan has also been working with local agency Sporttravel by Trafalgar, with Olive McNaughton being the point person.