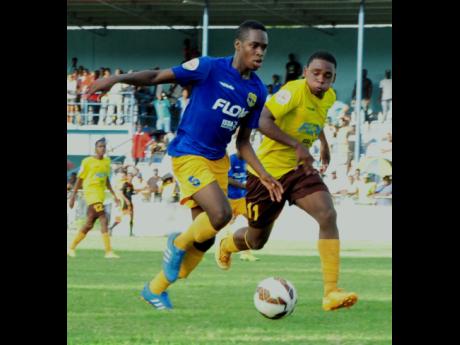 Seventeen combined chances fell for champions Clarendon College and Manchester High in the feature ISSA/FLOW daCosta Cup Inter-Zone football match at Middlesex International College in May Pen. In the end, it took just one to settle the hottest match of the Inter-zone round.

That honour fell to Tremaine Williamson, whose 60th minute thunderbolt header was enough to seal victory for Clarendon College and hand Manchester High their first loss of the 2015-16 season.

Billed as a blockbuster, the Zone Four game in May Pen surely lived up to expectations, with end-to-end action, particularly in the first-half, with both teams looking potent in attack.

Seigle Knight, the Clarendon College attacking midfielder, was particularly bent on getting in a shot at goal as often as he could and should have hit the target on at least two occasions.

Duhaney Williams, the danger man for Manchester High, should have given his team the lead in the 29th minute, after he was gifted the ball through an erroneous defensive pass. However, the in-form striker dragged his effort wide, with Eric Edwards in the Clarendon goal at his mercy.

Manchester High again came close to scoring in the 40th minute, but this time Romaine Walsh took one too many touches and had his chance snuffed out by the Clarendon defender.

The win was vital for Clarendon's confidence, as noted by their coach, Paul 'Tegat' Davis. He told The Gleaner he drilled his players on the importance of winning their first game in the Inter-Zone round.

"It feels good to win as both schools came to score goals. But we knew it would come down to a single goal because we both have good, sound defence lines," Davis said.

Munro College, meanwhile, just keep getting better and join Clarendon on points as leaders of the zone, edging Spalding High 3-2 in their game.

Former champions St James High took control of Zone One with a 2-1 win over Spot Valley High, while the game between The Manning's School and Frome Technical ended in a 1-1 stalemate at Frome Sports Complex.